A Pilgrimage to Bodegas Corral and Altos de Corral 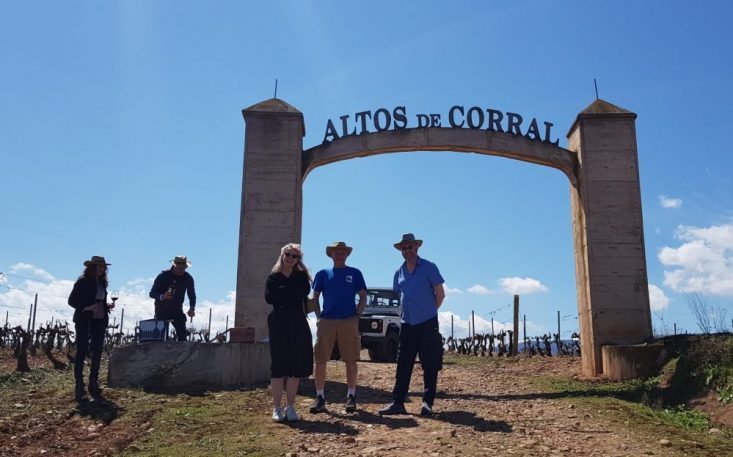 The Chilean poet Pablo Neruda wrote often about the joys of traversing a great path and once mused that he might ‘examine myself with no witness but the moon and then whistle with joy, ambling over rocks and clods of earth, with no task but to live, with no family but the road’. In those lines from the poem El Viento (The Wind), taken from his collection Fin de Mundo (End of the World) Neruda could be describing the experience of travelling the nearly 800km long Camino de Santiago. The camino, also known as The Way of St James, is a famously transformative pilgrimage declared the oldest in the world and awarded World Heritage status and takes, on average, thirty or more days to complete. The chance to reflect, to absorb the natural light and temperature variations and observe the dynamic undulations of the terrain can prove to be as healing as reaching the destination itself. 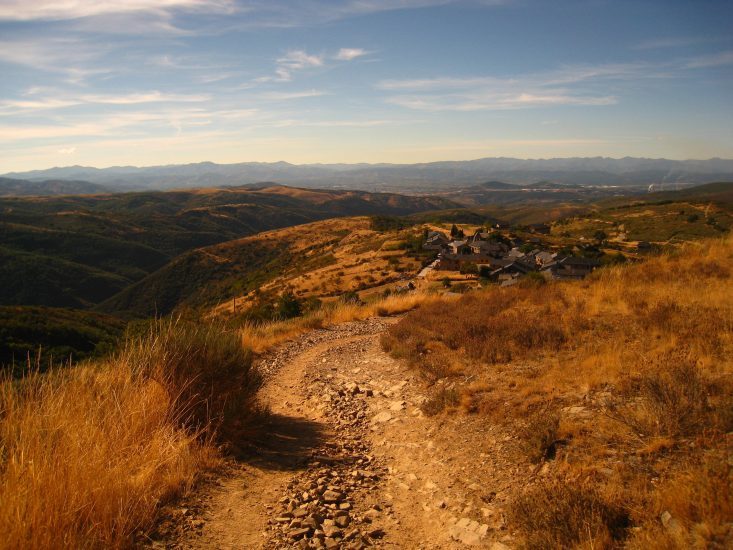 The Camino Francés passes through the winding countryside of Navarra and the red spun earth of La Rioja, ending at the medieval remains of St James the Apostle in Santiago de Compostela. Completing this mammoth expedition and visiting the 9th century tomb, situated in the medieval town in Galicia, north-west Spain, is a rite of passage for tourists across the world who hike the path and take in the sights by day and stay in modest lodgings and boarding houses along the route at night. One of the most famous sights along the way is the ancient wine fountain in the small Navarra town of Ayegui, home to Monasterio de Irache and the attached winery, Bodegas de Irache, which dates from approximately 1891. Created to provide motivation to fatigued pilgrims, a continuing tradition is for parched travellers to stop at the fountain to fill a pink-hued scallop shell with the strong and allegedly restorative rustic wine produced and blessed by the winery. They are advised to take caution when sampling the Monastery wine, due to its surprising alcoholic strength. As the route progresses there are more modern manifestations of the Camino winery, which have helped to transform the landscape and historical significance of Rioja, one of which being the chic and innovative Bodegas Corral. 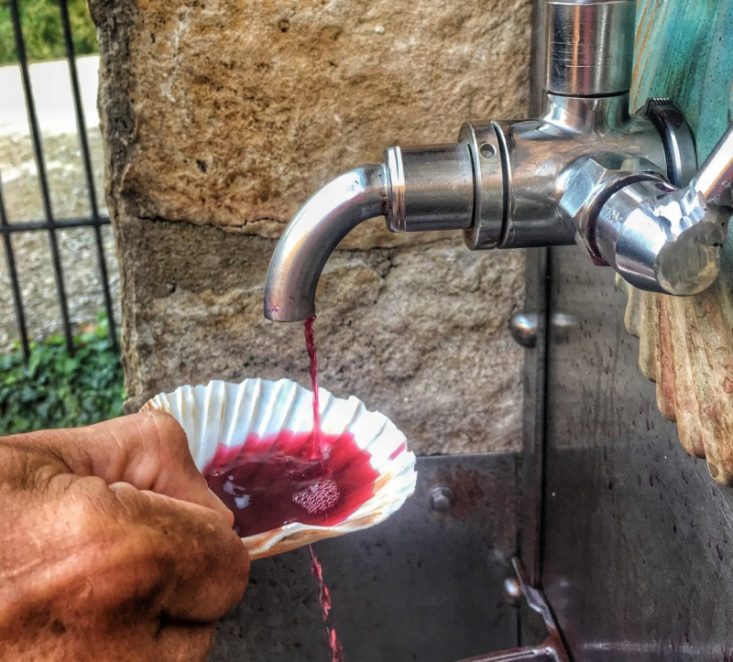 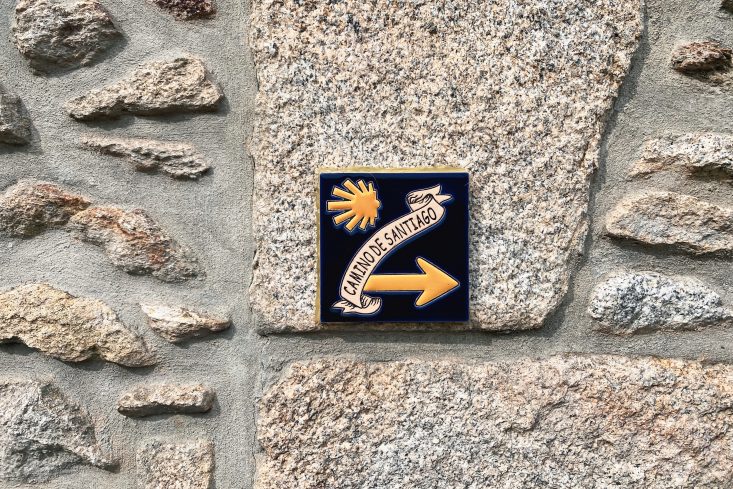 Bodegas Corral is a ‘centenary’ winery meaning it was founded over one hundred years ago, and the man behind the mission was Saturnino Daroca, a Riojano through and through, and both a grape producer and winegrower. He planted his first vines in the small village of Sojuela, close to Navarrete in Rioja at the heart of the Camino de Santiago, which passes close to the winery. It was within this particular enclave of the route that the San Juan de Acre pilgrims’ hospice was built in XII century, the remains of which can be found nearby. The tradition of travellers sharing experiences and whatever knowledge they had acquired prior to taking the pilgrimage began at the hospice whilst imbibing the local wine and cuisine and a culture of wine flourished in the area. From the winery, you can see the ruins of the San Juan de Acre pilgrim’s hospital, which cared for the travel weary pilgrims. Bodegas Corral describe Rioja as ‘a region of secrets and areas of deep silence, where the people of the land, over the years, have extracted from the vines the most delicate and delicious wines’ and this seems to be a fitting description of their journey. 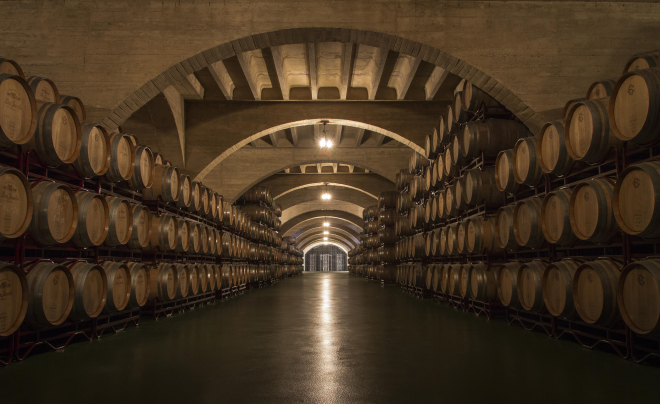 Back in the early years of the business, Saturnino’s daughter married Martín Corral, who gave his name to the winery and ceded to it, as a seal of quality, his coat of arms. In the 1950s, Florencio and Gregorio Corral, the sons of Martín Corral, joined the business just as new markets were beginning to open up and continued to build its reputation as a family estate committed to quality. In 1974, adapting to the evolving needs of the bodega’s production and sales, they built a new winery in Navarrete, carefully preserving their customary handcrafted wine-growing tradition. The winery is now in its fourth generation of family ownership and the same steady values underpin the operation.

The Altos de Corral estate is located in the municipality of Navarrete (Rioja Alta) and the estate’s 10 hectares (24.7 acres) is made up entirely of Rioja’s indigenous and emblematic grape variety, Tempranillo. The vineyards are located at between 400 and 800 metres of altitude on the slopes of Moncalvillo and the soil composition in the vineyard is clay-limestone in the north-facing parts and alluvial in the south-facing zone — mainly poor, stony, shallow soils with abundant ferruginous material that is amply expressed in the wine.  As well as ownership of their own vineyards in Rioja, they work closely with local growers with whom they have enjoyed relationships for several generations. The focus is on organic and sustainable production of indigenous grape varieties such as Tempranillo and Garnacha along with a cachet of limited release wines from special varieties such as Maturana Tinta aged in amphora and barrel fermented Maturana Blanca.

The tenets of their viticulture are based on sustainability and care for the environment and this means all vineyards are cultivated with organic methods and everything in the vineyard is completed by hand including pruning, green pruning and harvesting. These methods are undertaken with the utmost respect to the flora and fauna of the direct environment. From the flat table-top hill at 600 metre elevation there are spectacular 360 degree views across the vast valleys of Rioja Alta and Rioja Baja to the west and east respectively and the rocky ridges of Rioja Alavesa to the north.

“It is the greatest privilege, and the best fun of what we do, getting the opportunity to visit some of the most beautiful places in the world”, explained Mike after a recent trip to Rioja, Bodegas Corral and the Altos de Corral vineyard. “There’s nothing beats the serenity, the peaceful isolation, the closeness to nature of a vineyard. Corral though tops every place I’ve been for a view. Rioja, itself one of the most stunningly rugged and scenic wine regions, is just wrapped around and below this vineyard, you could stand for an hour just drinking it in. Which we did, before starting into the wine!”. 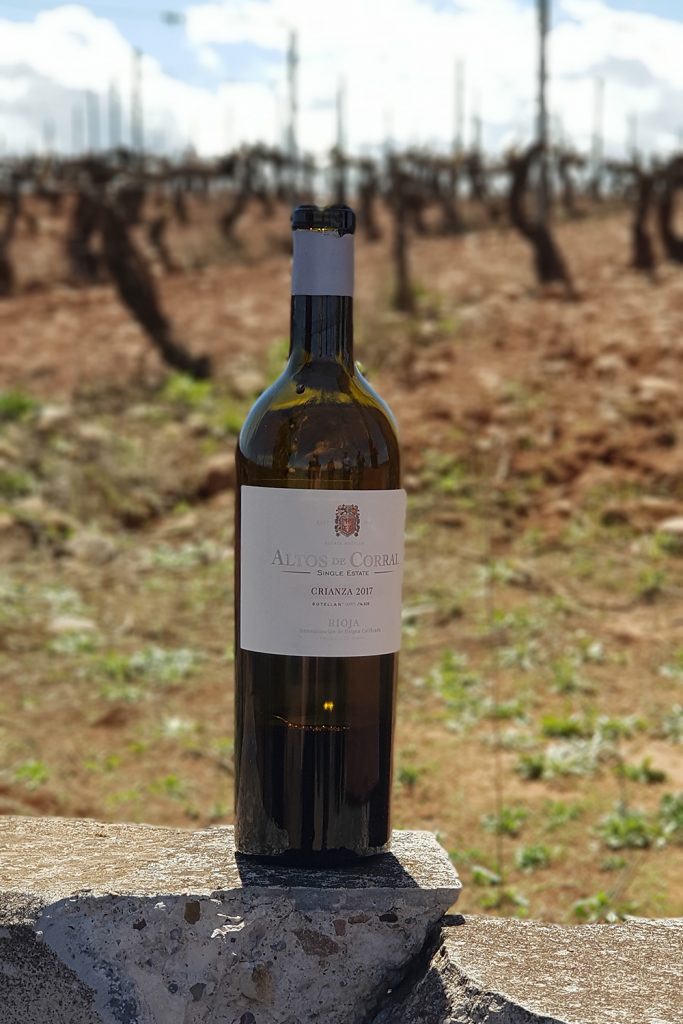 The unique character of their terroir is mirrored in the vibrancy of the Single Estate Crianza, a standout wine from our 2022 Christmas Mixed Case and premium Rioja selection. This wine is a Rioja through and through, with ripe black fruit aromas against a backdrop of black truffle and tobacco leaf. The Crianza is fermented and aged in new French oak for 12 month and then aged in bottle for a further 12 months contributing to its silky integrated tannins.

The wines from Bodegas Corral, including the ranges Altos de Corral, Don Jacobo Rioja, Vine Roots and a special project from winemaker Carlos Rubio Villanúa, Los Corrales de Moncalvillo, speak clearly of their provenance and attempt a reconnection to the terroir and traditions of the Camino and this part of Spain so steeped in rich history.