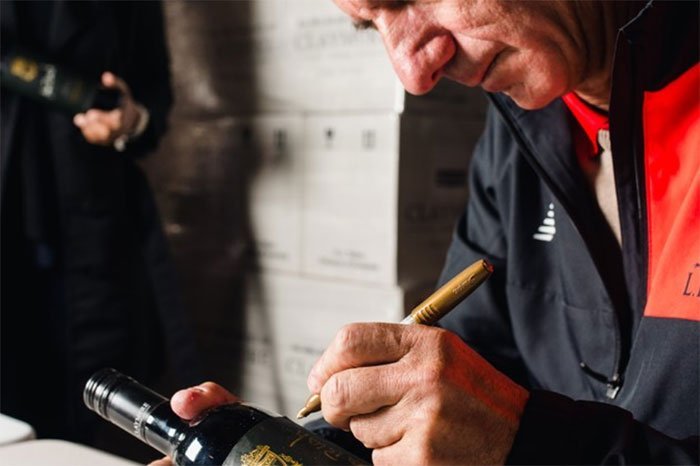 A couple of weeks ago we introduced the eye-catching (and utterly gorgeous) Claymore Wines, a new range of music-inspired labels from Australia’s Clare Valley including the Joshua Tree Riesling, Bittersweet Symphony Cabernet and Dark Side of the Moon Shiraz.

I must now confess that my curiosity in the winery was originally piqued by a second range of labels inspired by owner Anura Nitchingham’s love of something I’ve shared with him for over 40 years.

When I visited Anura and his team in Clare last April it felt like I was entering some strange, utopian premonition of my own afterlife — my family by my side, I was surrounded by wine barrels, bottles, tasting tables… and shrines to Liverpool FC.

Honestly, I thought I had it bad for Liverpool but this guy’s got a serious, special strain of football fanaticism — so much so he commutes from Adelaide to Anfield to see them play, with a season ticket he’s held for over 20 years.

In addition to shirts, scarfs, photos and banners, Claymore’s cellar door is adorned with barrels signed by famous players, with a special wall inside the barrel room set aside for footballer graffiti. Here, legends like Ian Rush, John Barnes and Alan Kennedy have taken spray cans to the wall to say “I was ‘ere”, like we used to scratch on our school desks.

Anura’s LFC infatuation is all over Claymore. His largest vineyard containing old Shiraz, Riesling and Chardonnay vines is called the Shankly Vineyard. He also personally owns the image rights to arguably the most iconic photo of Bill Shankly, showing the then Liverpool manager greeting fans in the city after losing to Arsenal in the 1971 FA Cup Final. This famous image adorns the Claymore You’ll Never Walk Alone GSM, a classic Chateauneuf-recipe red that’s smoother than Virgil van Dyke strolling out of defence.

What can I say — it was destiny.

We also came upon a range of official Everton wines on our trip, but we found them quite bitter, didn’t do well on a bar and collapsed suddenly on the finish.