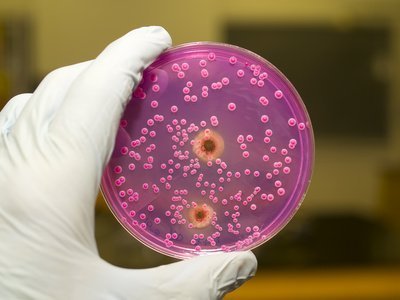 There’s nobody else in the wine world who could put it quite so elegantly:

“yeast, microscopic, single-celled fungi, having round to oval cells which reproduce by forming buds, are vital to the alcoholic fermentation process, which, starved of oxygen, transforms grape juice to wine. Sugars are used as an energy source by yeast, with ethanol and carbon dioxide as major by-products of the reactions.”

Whoever discovered the yeast-powered conversion from sugar to alcohol probably thought they were in heaven. Today some winemakers rely on yeast propagators and microbiologists to add an extra level of control to fermentation process. Supposedly these little organisms can have flavour-enhancing characters, so it’s important to get it right.

Different types of yeast are naturally present in the grape berry. These are known as wild yeast, and are spread around wineries and vineyards by insects. Many producers in the Old World still rely purely on wild yeast for fermentation, so they try to encourage their numbers by, for example, returning the dead yeast cells (sediment known as lees) from a previous fermentation, to the vineyards as a fertiliser. When this mixed yeast population is stable enough for wine fermentation, it is called ambient yeast.

Most New World winemakers, and an increasing number of Old World producers, are using cultured yeast. This is essentially a natural product also, but usually consists of only one strain which has been obtained from ambient yeast. This brings more control to the process and it makes it easier to tell what the results will be, thus reducing risk. The last thing a winemaker wants is all of the yeast dying off at only 7% alcohol.

The number of yeast strains on offer to winemakers is really quite incredible. Yeast trials in wineries and research laboratories identify strains that will deliver consistent characters in wine. Winemakers experiment with single cultures, wild ferments and even various yeast combinations to achieve the desired flavour and complexity, then they tend to stick to what works for them. Depending on region, grape variety and so on, different strains may be used for different wines, and by managing cleaner, more efficient ferments, less corrective action is needed.