Home Blog Curious Facts & Fun Wine by the keg: Would you?

Wine by the keg: Would you? 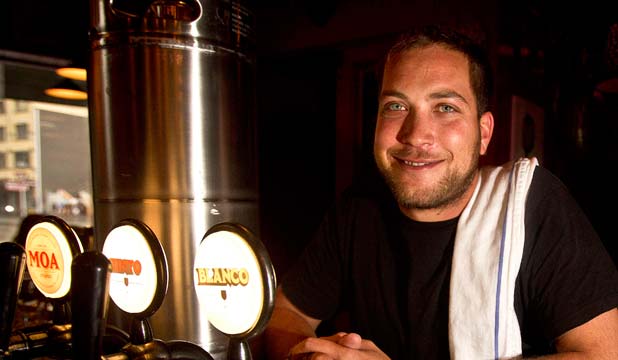 It’s a trend that began in Australia and has spread to the United States and Canada. Wine by the keg seems like a recipe for drunken disaster, but Revolution Wine Company, an Auckland based wine broker who are working hard to spread the craze around New Zealand, claim that it helps get rid of the snobbery around wine.

Now, am I wrong to say that Wetherspoons in the UK serve wine by the keg? I’ve certainly seen it come out of a beer-like tap, so I’m assuming it’s out of a keg, or is it out of a plastic tank? Perhaps there are bars that I’m unaware of here in Ireland using the keg system.

Supposedly it’s cheaper for the punter, not only by the glass, but a lot of bars and restaurants are serving it by the carafe or the tumbler. Critics say tap wine has too many variables which could affect the product, whether that is within the keg, the keg lines or the tap itself. Byron Henry (pictured) of Revolution Wine Company confidently dismisses this claiming there’s no difference in quality or flavour, and that it’s simply a different format. I can’t say because I’ve never tried wine from a keg, but I would imagine that if the equipment is up to scratch, why wouldn’t it work just like it has done for beer over the years?

Henry does make a good point that it’s a good way to get younger people interested in wine. It would be interesting to see how this would transfer to Ireland. What you wouldn’t want is for it to become the new choice of drink for teens, like Hooch did all those years ago, although I’d say it wouldn’t come to that. And as for the question mark over quality, isn’t there a lot of poor wine available out of a bottle? Why would you not give the keg a chance? Most wines are fermented and many aged for some time in stainless steel tanks, so a keg should really act as a good vessel.