White harvest done & dusted after a scorching summer in Bordeaux 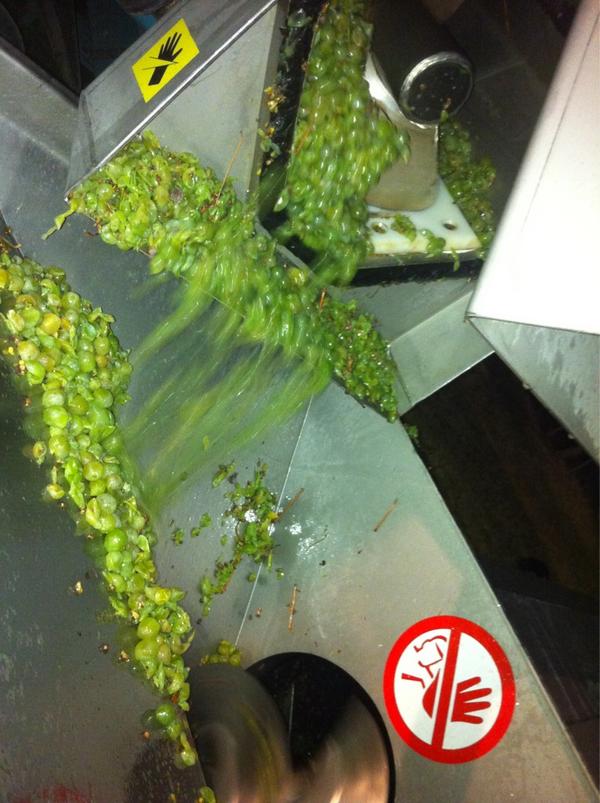 Now is a busy time for wineries across Europe. At the retail end of things, our silly season is that three week run-in to Christmas, but the winemakers equivalent of silly season is around harvest time.

Last week saw the harvest begin with the whites and rosés at Château Bauduc. The Cabernet will follow next month.

Europe, with the exception of Ireland of course, had a hot summer.  Last month winemaker and proprietor Gavin Quinney responded to Jancis Robinson’s request for ‘a brief report on how the Bordeaux vignoble is looking so far’. Here’s his response, which gives an idea of the challenges faced during a scorching summer.

After a long, wet spring, we’ve had a lovely summer in Bordeaux. Unlike last year, however, the owners and MDs of leading châteaux can enjoy the end of their August break on the Atlantic coast at Cap Ferret and Arcachon without feeling the need to rush back to their vines. The red-wine harvest is still some way off.

No two growing seasons are ever the same in Bordeaux but the contrast between 2011 and 2012 could not be more striking. Last year, there was an early budburst and the flying start was accelerated by a warm, dry spring. The lack of rain carried on until the second week of July, with many vines suffering in the drought-like conditions. The summer was then up and down, topped off by an early harvest of the dry whites at the end of August. Almost all the reds and sweet whites in 2011 were brought in during September, which is uncommonly early. The last time that happened was in 2003, an altogether different vintage.

After a dry winter, budbreak was a full three weeks later in 2012 than last year and a week later than the norm. The spring was wet, and vignerons have had to be especially vigilant in fighting off mildew, although the top estates are well equipped to handle this.

After fine weather at the end of May, the flowering in June was drawn out, with rain during the first two weekends of the month. The problem was not so much poor fruit set or low yields, although there is some millerandage and coulure, but I can’t recall seeing – across the region – such different stages of evolution from one bunch to the next (as in the pic, above), let alone one vine to the next. From that point on, it was certainly going to be a late harvest, with a risk that ripeness would be uneven.

If 2011 had a spring that was more like summer, and a summer more like spring, then 2012 is truer to type. From the second week of July onwards, we’ve had one of the best summers I can recall [I would second that observation from my vantage point in the Languedoc – JR], with some welcome rain during the first weekend of August (when we were glued to the Olympics). Other than that, it’s been hot, sunny and dry.

In fact it has been rather too hot and dry for some vines during the middle of August. The mini-heatwave has meant that some vines have simply closed down in the sweltering heat. Some exposed bunches have also had a grilling.

The August veraison, again far later than last year, has been protracted, just like the flowering back in June. In most parcels, the grapes have been changing colour at a leisurely pace.

After such a hot August, you might think that we’d be getting ready to harvest. But if you’re coming to the region to see the Merlots being picked, you’re best to book from late September onwards (precocious parts of Pomerol and Pessac-Léognan excepted). As for the Cabernets, aim for October.

Which goes to show that there’s a long way to go yet, and all to play for.

Pictured: “First grapes coming in. This is not where you want to drop an iPhone.”