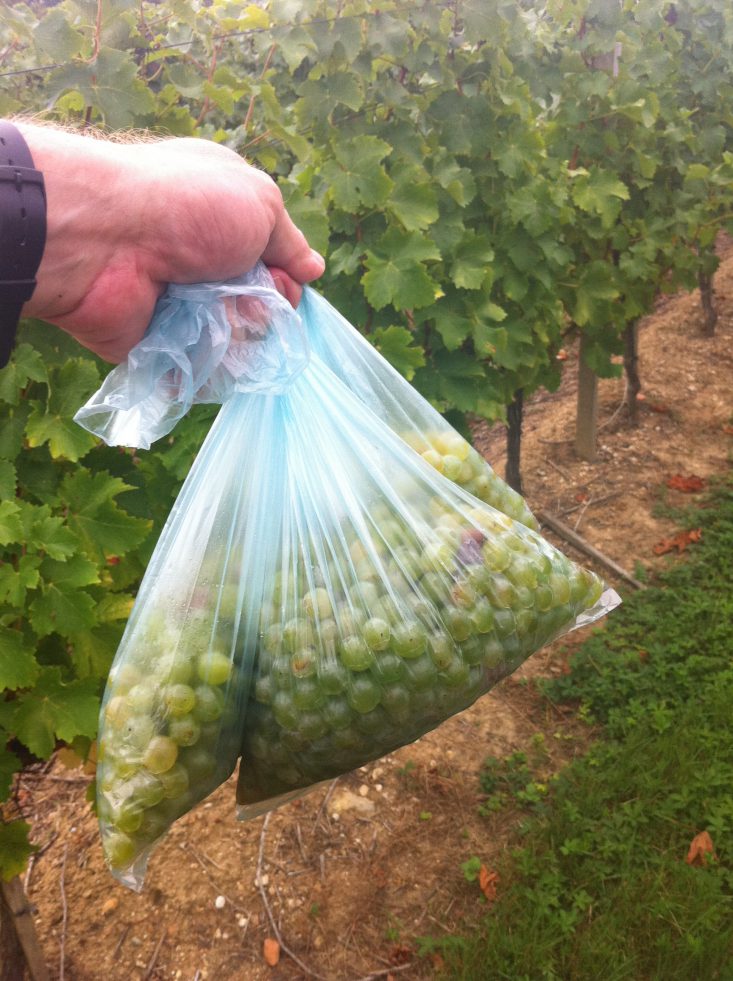 With the growing season almost three weeks ahead of last year, the harvest of the white grapes at Château Bauduc kicked off at the end of August. It hasn’t been the easiest vintage for Bordeaux, as blogged about here, with four months of near-drought from March to early July and a tad too much rain from mid-July to the beginning of September. The summer was cool overall but at times it was very humid, which caused problems. In the end, after getting hands-on in the vines to sort the grapes, the result looks to be a positive one.

Here’s the story of the white harvest in photos.

The grapes are tasted and samples are taken from the vineyard.

As harvest nears, Gavin checks the samples to measure sugar, acidity, PH and stuff that he claims he “doesn’t fully understand”. Well, I’m assuming he must know more about it than he’s letting on!

“With the warm and humid August weather, bastard rot had started.” The rotten grapes are easily spotted.

Bunches with rot are discarded the day before harvest. There was a lucky break with the weather, so they didn’t hang about. Pictured, some friends of the family help out, and in addition, six seasonal workers are employed for the week to check all the rows.

Gavin has hired the same man and his machines for the last six years. What initially looks like a scene from a Terminator movie, the harvester gets to work at 4.30am, the coolest time of the day when the intensity and freshness of the grapes is at their best.

The machine straddles the row of vines, shaking off and collecting the fruit. These rows are just 1.8m wide.

Advantages over handpicking include speed and picking before dawn.

As the vines surround the Château, the freshly harvested grapes arrive at the winery within minutes.

Straight from the trailer. The grapes are cool and fresh, experiencing minimal oxidation.

… and into a chilled tank to macerate the juice with the skins for twelve hours.

After an early start and a hectic morning, there’s just about time to grab a coffee and enjoy a break.

Gavin’s youngest, Tom, on the pneumatic press, which presses the skins with a giant airbag.

Keeping the right temperature in each tank for freshness and flavour.

The juice is settled in one tank before moving to another where cool fermentation takes place.