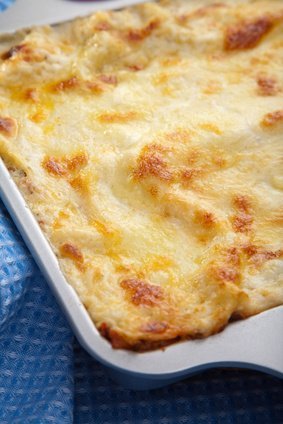 No no, please don’t go, meat eaters! It’s actually really good. In an effort to reduce my read meat intake, encouraged by the likes of this, I gave this vegetable lasagne a shot last weekend. It’s a very comfortable two hour, Saturday afternoon job I found, and this was partly because I made my own cheese sauce for only the second time, which is worth doing. There’s a link in the ingredients which will take you to one of Delia Smith’s recipes. Just remember to keep stirring!

Method
Soak the porcini mushrooms in boiling water for 20-30 minutes. In the meantime you can start getting to work on the tomato sauce. Heat some olive oil in the pan and add the onion. Cook until it starts to brown and then add the tin of tomatoes, stirring occasionally for just under 10 minutes. Season to taste and remove from heat and set aside.

Drain and slice the porcini mushrooms. Melt the butter in a new pan and add the porcini mushrooms along with the button mushrooms. Once they start to release their juices, reduce heat and add the garlic and lemon juice before seasoning. Keep it on a low heat until nearly all of the liquid has evaporated. While you’re waiting for this, pre-heat the oven to 200 degrees C and make the cheese sauce, stirring the mustard into the mixture at the end.

Grease an oven proof dish with butter and spread a layer of cheese sauce over the base. Place a layer of lasagne sheets over the top, cover with the mushrooms, another layer of sauce, another layer of lasagne, the tomato mixture and finally one more layer of the cheese sauce. Sprinkle with the parmesan cheese and bake for around 25 minutes. Keep an eye on it towards the end so as not to burn the top. You’re looking for a healthy, crisp golden colour. Serve up with a salad or two of your choice.

There’s a great flavour and richness in this dish from the mushrooms (largely thanks to the porcini’s), the tomato sauce and the cheese sauce. The mushrooms in particular bring an earthy depth of flavour, calling perhaps for a Pinot Noir. Maybe one with a little more fullness than many of the Burgundian’s would work best, so I’m opting for the Tabalí Reserva Especial Pinot Noir for this noble variety.

Equally, you’ll find those earthy flavours in many Italian reds, including Barbera. Bricco dei Guazzi Barbera del Monferrato has the perfect body weight and flavour profile to handle this veg lasagne, and I would nearly put it ahead of the Pinot Noir if you’re after something really different and interesting. If it must be white, go for a full-bodied, creamy Chardonnay, the Santa Alicia Gran Reserva Chardonnay being the best value for money at the moment.