2011 a tough vintage for Bordeaux 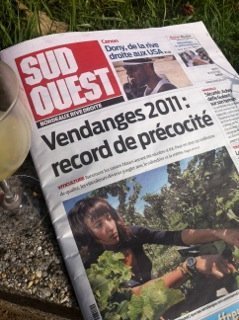 “It’s the best vintage in decades!”, the French will proclaim. It seems like we hear the same thing every year and I wouldn’t be surprised to hear it again over the coming months. The 2011 harvest is over, with winemakers now hard at work with that “making” part of the process.

Despite fairly major concerns initially, it’s looking like the region should keep its reputation intact. The yield is down, so they didn’t produce as much this year. That might not be a bad thing in the long run as so many other wine regions around the world are struggling with over supply, which leads to price damage and less profitable (or loss-making) business. As Bordeaux is full of great producers, most managed good quality despite reduced yields. Alcohol levels are relatively low and good maturity in tannins and pips, reasonable sugar and firm acidity have been reported so far.

So what was causing concern? After a cold winter, warm weather arrived before February had finished, bringing the natural cycle forward a few weeks ahead of schedule. By April, summer had arrived and a prolonged drought was underway. The soil was worked to encourage every last drop of moisture to go to the vines. Uneven ripening meant more work was involved in the vineyard to help homogenise the yield and in mid-summer bunches in some vineyards were shrivelling up like raisins.

A damp August brought some respite for the vines, but hail in September caused widespread damage in Saint Andre de Cubzac, Saint Estephe and Entre-Deux-Mers. When the hail stones are the size of golf balls, they cause pretty serious damage as Gavin Quinney found out in 2009. The situation was eased by the rain that followed, as damaged fruit was washed away leaving only the skins, otherwise rot would have been a problem.

2011 has been a tough one for Bordeaux, but how will it go down in comparison to other recent vintages? Well, that chapter will be written over the coming months and years as we buy and try for ourselves. Like we really needed an excuse anyway.