From the Latin exopto, are, avi, atum. To desire eagerly, or long for.

Clint Eastwood once reportedly said, “Keep your eyes on the horizon and your nose to the wind”, words that could easily belong to one of our favourite winemakers and a true visionary when it comes to the production of stand-out, modern Riojas, Tom Puyaubert of Bodegas Exopto in Rioja.

Arriving in Spain at the beginning of 2000 he had left behind his native Bordeaux in order to increase sales in La Rioja for the famous French cooperage, Saury. Tom quickly settled into the business of Rioja wine country, in the process becoming enthralled with the region, its vineyards, culture and whole way of life.

In 2003, he decided to set up Bodegas Exopto so that he could strengthen his ties with the region and express its character through a range of distinctive, original white and red wines. As he said back then;

“Tempranillo is definitely the Soul of Rioja and we have to respect it. It is the basis of the wine and its structure. Most of Riojas are made out of 100% Tempranillo, which I don’t really understand when you’re “allowed” to work with two other fantastic grapes that are Garnacha and Graciano. It’s maybe because of my French influence I like to blend. I thought it so interesting to blend the three varieties depending on the wine you want to make. Tempranillo will bring the structure, Garnacha will be used for its fruitiness and sweetness, meanwhile Graciano will bring complexity and good freshness.”

He was no wine novice upon arrival in Rioja, having already begun to cultivate his skills at the Shenandoah Valley, Virginia winery Rockbridge where not only did he learn the craft of wine-growing and wine-making, he also brushed up on his Spanish with the help of his Mexican co-workers. Of this time, Tom refers to “a complete experience technically, culturally, and even linguistically” and as a result of this early ‘immersion’ wine training, he determined what he wanted to do with his life.

In total there are about ten hectares of vineyards at Bodegas Exopto which he works on and uses in the production of their wines. These ten hectares are divided up into fifteen “micro-parcels” that have bush-trained vines of considerable age, ranging from thirty to ninety years old.The choice of vineyards is based on the idea of combination: different types of soil, orientation, altitude, and especially climate and terroir. All the Tempranillo vineyards are located in the town of Abalos, in the Rioja Alta, where the climate enjoys an Atlantic influence and is better suited to expressing the refinement and complexity of this variety. The Garnacha and Graciano vineyards are mostly situated on the hillsides of Monte Yerga in the south of La Rioja. The vineyards there are influenced by the Mediterranean, an essential climatic condition for developing the Garnacha properly and for full maturity of the Graciano.

His wine-making practices are unusual, but he is lauded, not least for his use of the relatively rare Graciano variety, but also for using concrete vats to ferment and age his wines. Bucking the age old trend of using American oak, he uses the best French oak he can get his hands on. If you’re in the right business, why not use your contacts right? Tom, in fact, continues to work in the selling of Saury barrels which allows him to keep in contact with his loyal customer base. 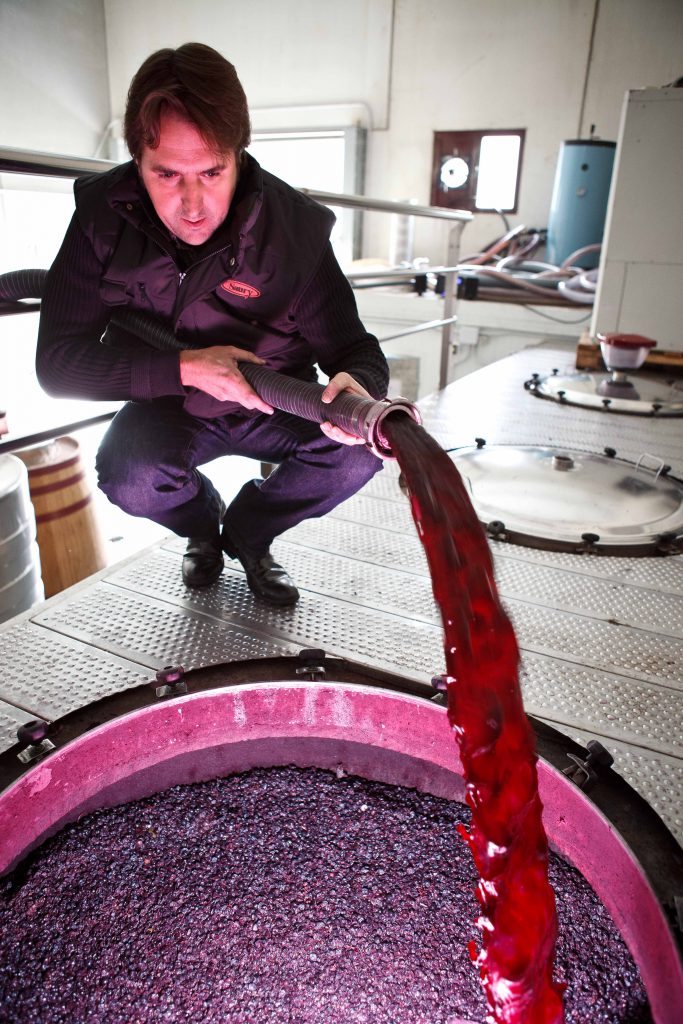 Of his wines that we carry here at Curious Wines, Bozeto de Exopto, as its name (meaning sketch or outline) suggests, was Tom’s first wine project representing all three red grape varieties. It is a young and fresh expression of the grapes with an explosion of fruity aromas and well integrated touches of oak. Made of a 50% Garnacha, 40% Tempranillo, and 10% Graciano blend and aged in oak for 9 months, spicy cherry and black raspberry are evident on the nose, with brisk mineral and floral overtones, sweet raspberry and blackberry flavors and snappy acidity.

Horizonte de Exopto was a labour of love first produced in 2003. At its heart is Tempranillo, La Rioja’s principal grape variety, but made in a different style, served to highlight his clear intention to create wines which are more modern, intense, highly-coloured and with just the right amount of oak.

“To be perfectly frank, in the beginning there was only going to be one red wine: Exopto… but after our first vintage, we thought we could do it better or at least differently — hence the name ‘horizonte’ (horizon)… suggesting that Exopto might appear — but that’s another story…”

The pinnacle of this creative endeavour is perhaps Exopto Rioja, a rich and complex wine made almost predominately from long lived Graciano alongside stalwarts Tempranillo and Garnacha. The distinctiveness of Exopto could be due in part to decisions taken in the vineyard in 2005, when heavy rains threatened to eradicate the crop. Fortunately, early ripening Tempranillo was ready to be picked whereas the Graciano was still a little under-ripe. When he finally had time to take a look, in October, nearly two months later, he found the Graciano nearly raisined on the vines but chose to pick it despite this. In this case, the resulting wine was exceptional and this led to the creation of his flagship wine, Exopto. With its great complexity, aromatic finesse and freshness, the wine symbolises Puyaubert’s vinous journey in a way, across wine regions, constantly pushing through boundaries in search of new horizons.