Toad in the hole & a rich onion gravy to pour 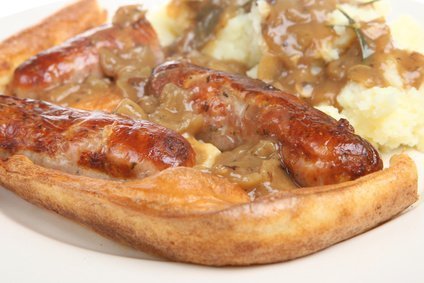 I know this is real winter grub here, but while April is refusing to behave I still have that urge to eat warm, rich, weighty food. The first time I tried toad was when Curious Davide (<– click and scroll down to view his other recipes) made it back in January. This is more or less how he did it.

The most important thing of course is your choice of sausage. Mass production has yet to master the sausage, not unlike the wine conundrum, so ignore those scrawny pink ones their flogging in the supermarket. There is only one place to pick up good sausages and that’s at a good butcher. You’re getting better value, supporting the independent, supporting choice in what we eat, and if your butcher is sourcing high welfare animals, you’ve nothing to feel guilty about.

Toad in the hole (serves 4)

Method
Pre-heat the oven to 220 degrees C. Mix the eggs, flour, milk, mustard with a whisk, beating out the lumps of flour. Season with a little salt and pepper. It should be a nice consistency, thick enough to coat the back of a spoon. Set aside for 10 or 15 minutes.

Put the butter in a baking tin and place in the oven until hot and melted. Remove from the oven and pour in the batter before arranging the sausages in it. This will cook in about 30 minutes, but just keep an eye on it. I like it nice and golden on top so that it crisps up.

For the gravy, melt the butter in a heavy base saucepan and cook the onions slowly until brown and soft. Get them really soft in texture so they’ll almost go to mush. Add the tablespoon of flour, stir and cook for a few minutes and add some of the stock, continually adding and stirring. Season with salt and pepper, add some Worcestershire sauce and bring to the boil, and then gently bubbly over 10-15 minutes stirring occasionally.

Serve the toad with vegetables of your choice and generously pour over the gravy. Be careful not to eat the plate too.

I would be partial to an artisan ale as an accompaniment depending on my mood, otherwise it would be a rustic, medium bodied Spanish or French red.

La Mano Mencía is the type of wine that would be enjoyed at the end of a hard working day by an old, dirty, withered miner, as would toad in the hole. It’s savouriness and earthiness give it real character, and it’s interplay with the flavours of the food should work a treat.

The beautifully crafted Moulin de Gassac Albaran would be my choice from France. Although it must be said, this isn’t the most complicated dish to wine match so by all means go with your gut instinct.