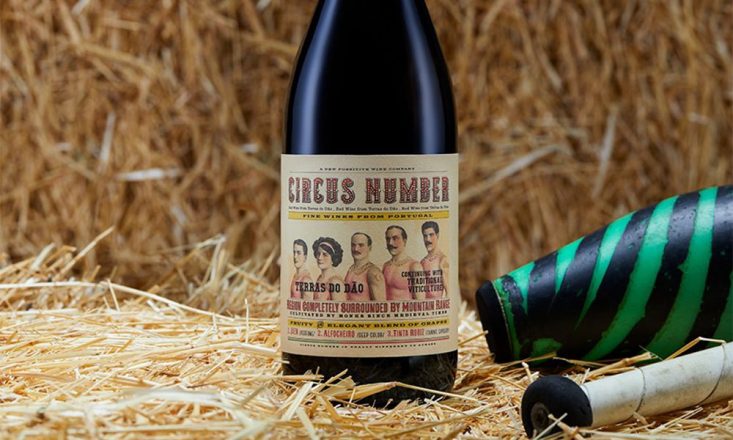 Here at Curious Wines, we are consistently drawn to interesting, small labels and producers, family ‘legacy’ wineries and the stories that are organically weaved around and through them, lending them cultural and historical credence. Sometimes, the wine itself is only half the story.

New Portuguese range, Circus Number from Natalia Jessa’s Gota Wines, imbue their wines with wholly mystical seeming yet totally real embodiment of amazing superhuman strength, flair and talent. Instead of food and wine matching, it is wine matched with its human counterpart which is certainly an interesting twist on the same old tired and well explored trope.

Their fruity and elegant red Dão offering, made of local varieties Jaen, Alfocheiro and Tinta Roriz bears, on its label, the unlikely emblem of diminutive musclebound hero Joseph Greenstein, aka ‘The Mighty Atom’, who could break chains with his chest, drive iron nails through his hands, bend horseshoes with his teeth, and sculpt steel rods into the shape of hearts. Standing small at just five feet four and 145 pounds as an adult, the Polish – born Jewish strongman arrived in the world in 1893, a sickly and underweight baby who went on to endure childhood – long respiratory problems, succumbing to tuberculosis as a teenager and then defying doctors who predicted his demise by fleeing his home to run away and train with established Russian Circus performer ‘Champion Volanko’ who bestowed his rigorous training regimen on his young protégé.

Travelling Russia, central Asia and India, Greenstein learnt Yogic breathing techniques from an Indian strongman, The Great Gama, and became proficient in martial arts such as jiu jitsu, wrestling and other movement techniques. After meeting and falling in love with his wife, Leah, the couple left Eastern Europe for the United States once the rise of anti-semitism became inescapable and once there he began wrestling professionally under the alias, ‘Kid Greenstein’.  His next brush with death was in 1914 at the hands of a man who had become obsessed with Leah, and attempted to murder Greenstein by shooting him between the eyebrows from a distance of just 30 feet. That bullet had met its match with a skull as hard as The Mighty Atom’s, however, and merely ‘flattened out against his skull’.

This event may have solidified Greenstein’s life long obsession with strength and mental power and sparked Greenstein’s interest in the mental powers associated with strength. He developed his own techniques for tapping into the so called “life-force; ” a technique that encompassed Asian methods of concentration, Jewish mystical writings, and a then-unheard-of vegetarian natural diet and spent his life gradually unlearning the subconscious mechanism that forces us to stop when we think we have reached our physical limits. Through pure grit and determination, informed by his difficult childhood and innate sense of survival, he developed an array of strongman feats which he performed well into his eighties, giving his last performance in New York, at the age of 84. Well loved, symbolic of strength and vitality and a source of endless inspiration, they could not have picked, in Greenstein,  a more resonant poster child to advertise their wine. Whether or not we are drawn, as consumers and buyers to the meshing of wine and biography in this way is something which is being explored more and more as people try to sell wine in ever more creative ways.

Other wines in the range include an Alentejano white depicting Lulu, who in 1873, was the first woman in America to go airborne before grabbing onto a trapeze or rope and other varietals feature colourful, retro illustrations of masked acrobats and tattooed figures all with the focus on great feats to be celebrated. The positivity and ‘anything is possible’ ethos of the wines is inescapable and infectious and puts Portugal firmly on the map as a wine producing country without limitations or fear.