The brilliance of the North Island 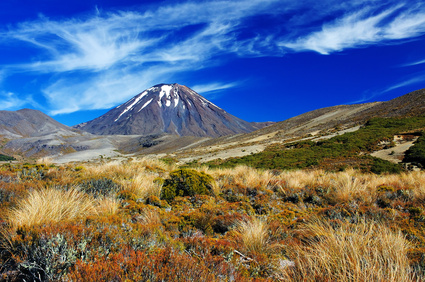 New Zealand’s North Island has a lot more to offer than you might think. I was told before I went there to not even bother with the north, and yes, while the South Island has more to offer in terms of jaw-dropping scenery, the North has its fair share of unique attractions, wine included.

The Tongariro Alpine Crossing is one of the world’s most famous day walks, which takes you up alongside Mount Ngauruhoe (pictured) and Mount Ruapehu, two active volcanoes which represented Mount Doom in Peter Jackson’s film adaptation of The Lord of the Rings.

You can head north into the Bay of Islands, where you’ll find some of the world’s most accessible wildlife, or east along the Bay of Plenty to the steaming geothermal town of Rotorua. The capital, Wellington, is a young, vibrant, cosmopolitan city – only a stones throw from some of the New World’s greatest wine.

The further you go north, the closer you get to the equator and the warmer it is. The Auckland wine region is warm, and despite being prone to harvest rains, the good years produce well-built, beefy reds. Sub-regions include Matakana and Waiheke. Robust Bordeaux blends dominated by Merlot are being produced with notoriety, as well as Burgundy style Chardonnay.

Gisborne stands on Poverty Bay on the east coast, once known for its bulk wine made from Muller-Thurgau. It has found its strength in creating arguably the nation’s best Chardonnay. Gewurztraminer and some well priced Champagne-method sparkling wines are being ‘hand-crafted’ here. Montana (or is it Brancott now?) have their North Island base here, and Nobilo, who originated in Auckland, are getting down with some very impressive oaky Chardonnay.

Further down the coast, Hawkes Bay is doing well with its Bordeaux blends in sunnier sites, but like Gisborne, is well known for its buttery Chardonnay. The likes of Villa Maria have been making subtler, gentler and very approachable Sauvignon Blanc. Te Mata has one of the most interesting ranges including a Sauvignon Blanc, Chardonnay and a muscular Cabernet-Merlot, and Bilancia are offering up amazing Syrah.

Near Wellington, at the southern tip of the island, the Wairarapa region incorporates Martinborough, from whose vineyards many believe are responsible for the New World’s finest Pinot Noir, or at least New Zealand’s finest. Clean, raspberry fruited, deeply complex with Burgundian-like acidity. Syrah and plump Cabernet-Merlot are a tasty alternative to the premium pinots, and on the white front I’ve tried some excellent Riesling, both dry and off-dry.

20% off New Zealand up to and including October 31st.