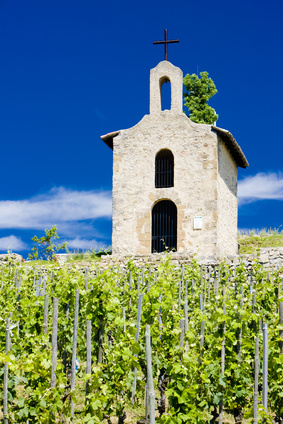 It’s the most famous and best wine of the region, but what is the big deal about Châteauneuf-du-Pape? Is this Southern Rhône appellation all it’s cracked up to be?

This is the third part of a three part series exploring Rhône. View part one here and part two here.

From 1309 to 1377, the pope resided not in Rome but in Avignon in the Rhône Valley. Although a Papacy known for greed and corruption, they adored the wines of Burgundy and Rhône. One nearby commune soon became known as “Vin du Pape” (Wine of the Pope) and later “Châteauneuf-du-Pape” (New Castle of the Pope). I’ve heard the Papal Palace in Avignon is well worth a visit.

Châteauneuf-du-Pape, with one of the strictest set of regulations in France, is permitted to use an impressive thirteen grape varieties in total, but in reality Grenache dominates the majority of blends. Syrah, Mourvèdre and Cinsault are also key components used. Sounds familiar, as all of these grapes thrive in Southern Rhône.

The wines are big and bold, concentrated in flavour and high in alcohol. Regulations mean that yields must be kept low (concentrating flavour) and strict selection involves only healthy grapes being used. Many of the vineyards have large rocks, the size of a tennis ball and bigger, around the vines. These help store heat, so the ripening continues during the night.

Over the years people have come to rely on Châteauneuf as a source of quality, premium red wine with a style of its own, however its name has arguably been tainted of late with cheap offerings in the supermarket. These wines, bought from negociants, tend to be promoted as ‘half price’.

Unfortunately in lot of cases the offer is too good to be true, as the wines don’t live up to what people expect from such a great name. The grapes are sourced from very young vines, and are often sold off inexpensively as unwanted stock from wineries. You should still get a perfectly acceptable wine in its own right, but it’s just not how Châteauneuf made its name and as a result some people have lost faith.

I would encourage people not to be put off by this recent trend, but the same general rules apply, which is you get what you pay for. So if you’re paying €10 for a bottle, don’t expect it to taste like the Châteauneuf of old. Usually you’ll get better value from a Côtes du Rhône Villages in the lower/mid-range price bracket.

The key appellations north and south have been covered, but you may also stumble across lesser known names. For example, Rasteau, a fairly inexpensive red often with a little more ‘poke’ than the standard Côtes du Rhône, and Beaumes-de-Venise, known for its red wines and white Muscat, are two designated villages whose reds are sold as Côtes du Rhône Villages.

Tavel and Lirac produce very notable rosés on the right bank of the Rhône, some of which, particularly those of Tavel, are among the very best to come out of France. Lirac also produces full-bodied red and white wine.

Côtes du Ventoux is one that is perhaps more familiar to the Irish wine drinker. It’s not quite Rhône and not quite Provence. The Grenache-based reds and rosés tend to be lighter than Côtes du Rhône.

Our Rhône sale is ongoing up to and including the 31st of March.