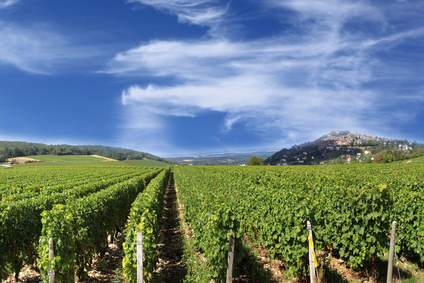 Without a doubt the cool climate Loire Valley deserves to be one of the world’s heavyweights when it comes to wine. It is arguably where the world’s best Sauvignon Blanc is made and that’s what most people know it for. But otherwise it can be somewhat overlooked. Some think that because it is so far north, the wines don’t achieve that sweet ripeness needed to become commercial and mainstream. Maybe that’s a good thing for the curious wine drinker.

Over this three part series we’ll look at what Loire does well in addition to the crisp, racy whites from Sauvignon Blanc, including some amazingly distinctive reds made from Cabernet Franc and not forgetting the best wine match for oysters in the shape of Muscadet. First of all, though, I think the famous Sauvignon Blanc producing sub-regions of Sancerre and Pouilly-Fumé merit a short post of their own.

Sancerre and Pouilly-Fumé are to the far east of the Loire, actually closer to Chablis (northern Burgundy) than Muscadet in the region’s far west. Sancerre is a hilltop town (pictured, in the distance) on the left bank of the Loire River, and the area surrounding it has been a prime site for viticulture since Roman Times. It was in the 1970s that the modern commercial success of both Sancerre and Pouilly-Fumé really got underway as they became the must have white for any quality restaurant.

Within the Sancerre region itself are varied terroirs, and by that I mean areas with a different soil make-up and micro-climate, which directly effect the style of the wine, sometimes in a very subtle way and sometimes not. The western vineyards predominantly consist of clay and limestone, which can make the wine quite powerful and intense. The more gravely vineyards lend more restraint and elegance, while the flint (silex) laden soils closer to the town can produce wines that are long living and particularly perfumed with excellent minerality and notes of ‘gunflint’.

On the other side of the river, the wines of Pouilly-Fumé from mainly limestone based soils produce a similar style. A blind tasting of Sancerre and Pouilly-Fumé would be a tough test for any wine drinker, but Pouilly-Fumé wouldn’t tend to be quite as diverse in terms of terroir. Some vineyards are rich in flint, however, so that distinctive smoky gunflint character can be found in the better wines. What Pouilly-Fumé doesn’t do is red wine. Sancerre has some success with light reds and rosés made from Pinot Noir. Both can use oak in their Sauvignon Blanc, but more often than not it is only to give texture and palate weight as opposed to making the wine taste oaky.

Ultimately both regions produce very lean, green and racy Sauvignon Blanc’s with glorious palate cleansing acidity. Like everywhere you’ll get some that don’t do justice, but in general both regions produce high quality wines. They can be enjoyed on their own, or ruined with anything sweet (sweet and acid don’t mix – it will make the wine taste bitter), so when pairing with food go for something with high acidity. Traditionally the goats cheese of Sancerre is one of the best natural matches, but any good Irish goats cheese will do the same job.

In part 2 we’ll explore the other white wines of Loire Valley, as well as a little sparkling wine. Click here to view our sale on Loire wines.