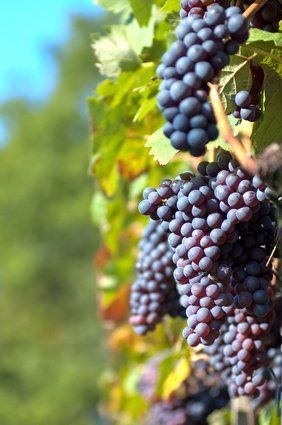 In the second part of Sam’s take on the classic grape varieties, we explore two more whites and four more reds. Although firstly, you must be forewarned – Sam has a way with words – please don’t take these descriptions literally, and if you’re the sort that is easily offended, look away now. For part one click here.

At its best Riesling touches the heavens – from the driest, primal streams of mineral lime to the precious drops of platinum clenched fantasia to be found in the great German and Austrian eisweins, Riesling has it all. Let’s be honest, if you say you don’t like Riesling because it’s too sweet, too German, too whatever, you are a tube. It’s nothing to do with personal taste – you haven’t got any. Saying you don’t like it is like saying you don’t like the Beatles. It’s just wrong.

Yes, we know, you don’t like it because nobody else does and it’s buttery and (gasp!) it might just taste of something. We would suggest you drink Chablis instead, but then, as you know, it’s 100% Chardonnay as well, and you don’t like Chardonnay. Except Chablis. Which is Chardonnay. And maybe Pouilly Fuisse, which is… um… Chardonnay as well. Don’t be a silly sausage and stop ignoring this magnificent grape variety just because Michelle with the £120 bleached haircut thinks it isn’t fashionable. (Just don’t bother with NZ if you don’t like buttery – everywhere else is gorgeous!)

Imagine licking a Sherman tank that’s been machine gunned with blackcurrants then seasoned with cracked black pepper – et viola – Shiraz! It’s the glory of Hermitage and Cote Rotie, the majesty of the Barossa and McLaren Vale – hot bricks, mulberry, fire, brimstone and crushed violets (with pumped up with a nip of Viognier) are the order of the day when this baby is singing.

A schizo bitch of a grape variety – one of the prime ingredients in Rioja and Chateauneuf du Pape, astonishingly vibrant in Australia, easily the most versatile of red varieties, Grenache is an uber-fruit-bomb laced with nuked spice racks and wild herbs. Both feminine and masculine, alluring yet sturdy, juicy but scary – Titty von trap in a glass!

Like a yapping child it’s as fickle, testing and annoying as they come, but ah… the hugs for daddy when it’s being nice! At its best this grape is as good as it gets – fountains of wondrous rose tinted raspberry nectar with oriental spice rainbows and insane aromas of truffles and farty undergrowth. Quite frankly, all other wine is for pussies.

Imagine castanets, ridiculous metador costumes, hairy arm pitted women, affected lisps and all delivered with a hilariously serious face. This is camp Cabernet Sauvignon, Claret with a Sergio Leone score, and as such it is irresistibly good fun. Usually a good splash in Rioja, but for the definitive version check out Ribera del Duero…

Thanks goes once again to Sam for allowing us to share his weird and wonderful work. View part one here.