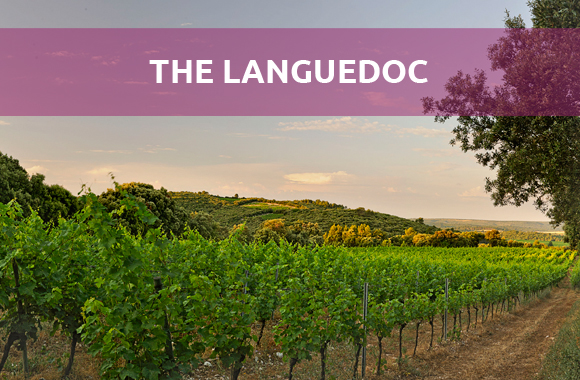 THE LANGUEDOC, France’s most ‘new world’ wine region, is a massive, diverse expanse, arcing from Montpellier southwest around the Gulf of Lyon towards the Spanish border. One quarter of France’s vines grow here, a figure that used to be even higher not so many years ago when the Languedoc was basically one huge plonk factory. Thankfully, European Union incentives have been effective in encouraging many of the more indifferent growers to exit the industry and, in the four years to 2009, the vineyard area shrank from 290,000 hectares to (a still enormous) 236,000 hectares.

The Languedoc’s terroir varies, but a good swathe of the land is garrigue, the typical southern French landscape of arid scrubland and hardy herbs over limestone soils. Although hillier spots are cooler, overall it is a roasting, parched place, with a proper Mediterranean climate.

The best known appellations are Corbières, Faugères, Minervois, Saint-Chinian and the catch-all ‘Languedoc’. There are a number of noble ‘crus’, too, that can add their name to a label but are still technically considered part of AOP Languedoc. These sub-districts – including La Clape, Picpoul de Pinet, Terrasses du Larzac and Pic Saint-Loup – are destined to become independent appellations in the not-too-distant future.

A colourful jumble of grapes is utilised in this blender’s paradise, with unfashionable Carignan and Cinsaut losing ground all the time to cepages ameliorateurs (‘improver varieties’) Grenache, Mourvedre and Syrah. Although four-in-five Languedoc bottles are red (warmer regions being more suited to red production), interesting – often high quality – whites are made, as well, from blends of Grenache Blanc, Bourboulenc, Marsanne, Vermentino, Viognier and others. Cinsaut is used for rosé, while fortified wines invariably call on the services of the Grenache or Muscat families.

So that’s the skinny on the Languedoc: a big, boisterous, exciting region that has made the successful transition from quantity to quality in little more than a generation – nice work, Languedoc!

Château la Négly ‘La Falaise’ La Clape €19.20 on promo
Massive GSM that will pretty much ruin you for all other reds – sorry about that.

Mythique Languedoc Blanc €11.59 on promo
Try with lobster and mango salad with a beurre noisette, if you’re a really good cook.