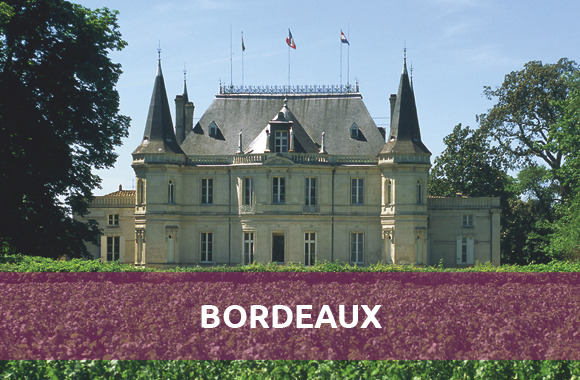 HOME TO 10,000 GROWERS farming 120,000 hectares, Bordeaux’s 57 appellations churn out everything from weedy dishwater to the world’s most lionized, weepingly-expensive wines. Pretty much the entire production is of Appellation d’Origine Protégée (AOP) quality, making it the largest producer of AOP wine in France. At almost ninety per cent of output, Bordeaux is overwhelmingly red wine country. On the gravelly ‘left bank’ of the Gironde estuary, where Cabernet is king, lie elite communes like Pauillac and Margaux. Merlot thrives to the east in the heavier clay soils of the ‘right bank’, where Pomerol, Saint-Émilion and the Côteaux live. Much everyday red Bordeaux trades under the modest ‘AOP Bordeaux’ name; these can be made anywhere within the region, though in practice they tend to come from Entre-Deux-Mers, a flat plain between the two ‘banks’. Merlot is the dominant red grape in Bordeaux overall (62%), followed by Cabernets Sauvignon (25%) and Franc (12%). Petit Verdot, Malbec and Carmenere are also allowed, even if the last two are little seen these days.

Bordeaux’s reds are complemented by dry whites based on Sauvignon and Sémillon, sometimes with a little Muscadelle, either as a simple, early-drinking expression (AOPs Bordeaux and Entre-Deux-Mers) or a complex, oaked, long-lived style (AOPs Pessac-Léognan and Graves). Of course, sweet white wines are made, too, in the form of Sauternes, the ultimate dessert wine.

Bordeaux’s maritime climate is barely warm enough for the red grapes it specialises in so vintages really do matter here: 2009 and 2010 were both acclaimed as ‘vintage(s) of the century’, while the tragic 2013 was variously described as ‘the most challenging in a generation’, ‘great for mushrooms’ and ‘merde’. Rain around harvest time is especially problematic, as it dilutes the crop, increases disease pressure and forces growers to harvest earlier than they might like.

Bordeaux totally dominates the fine wine auction market, through a combination of the large volumes it produces relative to other fine wine regions (e.g. Burgundy), its wines’ longevity and the region’s established reputation. Many of the top labels are sold ‘en primeur’ as futures contracts, before the wines are even bottled, although cracks have begun to appear in the system.

As well as Bordeaux’s abundant appellations, it has five classification systems, the details of which can be confusing to even seasoned wine trade professionals. The ‘1855 classification’, which ranks the best properties of mainly the Médoc, is easily the most famous. It stratifies ninety-odd châteaux across five different ‘growths’. The top five, ‘premier cru classé’, wines are priced out of reach (€2,000 a bottle, anyone?) for all but the one percent.

But there’s something for everyone in this complicated, infamous wine region, whatever your budget, so dive right in!

***Bordeaux is included in our current French wine promotion, 20% off when you buy 2 or more French wines under €25. CLICK HERE to start shopping.***

Ginestet ‘Classique’ Sauternes 2011 €14.39 on promo
The world’s most-famous sweet wine – beautiful on its own or with salty blue cheese.