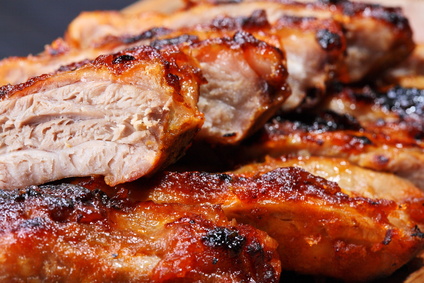 One of my father’s best friends is a Chinese man called Oscar who he’s known since university. My parents actually went on holidays with him and his wife recently. He’s a great man for the cooking, and oriental style is his forté. One dead simple recipe that has been ingrained into the family cook book is Oscar’s spare ribs. Pig’s ribs obviously.

Method
Although the above quantities should be perfect for two people, this is somewhat of a freehand job. Cook as many ribs as you think you’re going to use. This is easier to gauge when you see how much meat is on the ribs. Use the butter, syrup and soy sauce as you will to get the taste and balance you want. The soy sauce acts as seasoning, accentuating the sweetness of the syrup.

Pre-heat the oven to a toasty 200 degrees C (minimum). In a suitable roasting tin melt the butter in the oven and then add the syrup and soy sauce and heat up for a few minutes. Remove from the oven and allow to cool just about enough so you can smother the ribs in the mixture with your bare hands. Then fire the whole lot at the top of the oven for about 20 minutes. Check on it and if you want to golden it up a bit more, give it another 5 or 10 minutes. Serve as a starter or keep as a tasty snack, a light dinner or with brunch.

With the sweetness of the syrup and that dark rich depth of the soy sauce I think a not too dry red wine should work well. We’re not dealing with spice here, to our advantage. Some of the New World reds have that little touch of residual sugar that make them so utterly drinkable, but with something like this, even for someone who likes the drier styles of Bordeaux, you should find there’s a better balance when enjoyed with this kind of food.

The Santa Alicia Reserva Malbec or the Grandiose Cabernet Sauvignon do that for me. As reds go, neither leave your mouth feeling like the Atacama desert. For a good mid-range option, try the Langmeil Three Gardens or the Woodstock Cabernet Shiraz. On the white front, an off-dry Riesling would be hard to beat. The Muddy Water James Hardwick Riesling is the perfect option for that light lunch scenario.