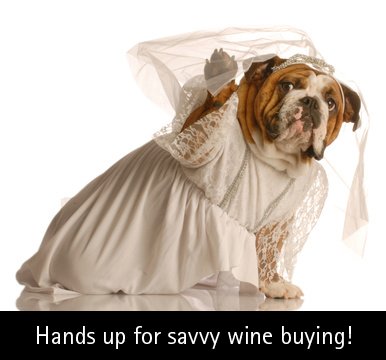 Online wine retailers continue to lead the way as the suppliers of choice for couples getting married in Ireland, according to our most recent wedding wine survey, in conjunction with WeddingDates.ie.

The survey questioned engaged couples on a range of issues from hotel corkage to the impact of the economy on their overall wedding plans and budgets, and follows on from our first survey on the same subjects almost two years ago.

The most recent survey found that 3 in 4 couples still say “I don’t” to hotel wine, preferring to bring their own wine despite significant falls in the prices on wine lists. Of those couples purchasing hotel wine, over 4 in 10 reported paying €15 or less per bottle, versus only 1 in 10 two years ago. For those bringing their own wine, whereas more than half paid more than €8 corkage two years ago, less than 3 in 10 do today, with 1 in 6 claiming free corkage from their wedding hotel!
Over half of all couples admitted to “cutting back some of the costs” of their wedding due to the current economic climate, with 1 in 10 postponing their wedding because of it, an increase on both counts from the last survey.
And it’s the online retailers who still appear to be benefiting the most from frugal couples. Almost 1 in 4 engaged couples are considering buying their wedding wine from online retailers, versus 1 in 5 for traditional off-licences or wine stores and 1 in 5 considering supermarkets.
And the good news continues for wine purists, with 97% of respondents saying that selecting the right wine is an important part of their big day, and 19 in 20 couples valuing expert advice on wine selection.
Interestingly, whereas both hotels and supermarkets are up in couples’ preferences from two years ago, it appears to have come at the expense of overseas suppliers as the latest survey showed a significant fall in the number of people going outside Ireland for their wedding wine. Less than 6% of couples are considering buying their wine outside Ireland versus more than twice that number two years ago. That has to be good news for everyone.
Now, the fun part! We were offering up three wedding wine tasting kits to three lucky respondents to our survey, so without further ‘I do’: congratulations to Fiona Moran from Dublin, Stephanie Motherway from Cork and Alan Henderson also from Dublin!
Thanks so much to everyone who took the time to complete our survey, the responses always make for interesting reading and show once again how savvy buying is in. Best wishes and a clinking of wine glasses to all the couples getting married this year.
WeddingDates.ie was launched in 2008 and is Ireland’s dedicated wedding venue finder. WeddingWines.ie was launched in January of this year to make buying wedding wine online easier for couples.