Old World Zinfandel in the 'heel' of Italy 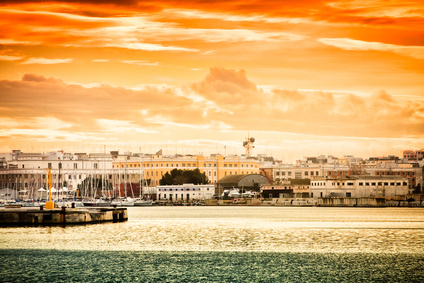 Zinfandel has a curious history. Californian winemakers have made it famous, but its birthplace was not Napa. Far from it in fact.

Originating in Croatia, where it is known as Crljenak Kaštelanski, it landed in Puglia, the ‘heel’ of Italy, in the 18th century. This early ripening variety is thought to have been introduced by a priest, not an uncommon thing in those days as the Church were the original wine evangelists. The grape then found its way to East Coast United States by 1829, and by 1950 it had reached California. Some Italian winemakers who ship Primitivo to the U.S. label them as Zinfandel.

Puglia incorporates the Adriatic port of Bari (pictured), and in terms of volume is one of Italy’s most significant wine regions. The southeastern province of Salento is generally where the best reds come from, Negroamaro being one of the specialty grape varieties. Primitivo di Manduria makes colossally alcoholic reds from the Primitivo grape, but there are more winemakers than ever now who are managing to bring more restraint, and more importantly, better balance to the wines.

Primitivo vines are quite vigorous and grow best in climates that are warm but not too hot. Thin skins mean the grapes can shrivel if it does get too hot. With the fruit ripening early, the time on vine can be extended to produce a wine with a high sugar content. Weather permitting, the winemaker may even make late harvest dessert wine. Anyone who has tried the Sessantanni Primitivo di Manduria will notice a sweetness from the high sugar, made even more noticeable by the relatively low acidity. This is quite typical of the richer styles of Primitivo.

Just because it is a vigorous vine and early ripener, it doesn’t mean that it’s an easy grape to work with. Uneven ripening means that to achieve better quality the winemaker must ensure unripened grapes are dropped, or that a rigourous selection process is carried out in the winery before vinification.

I think Primitivo, or Zinfandel, is a variety that most lovers of full-bodied red wines will really enjoy. They aren’t for the faint hearted, as the alcohol tends to be quite high, but Puglia winemakers are coming up with more and more fantastic, affordable Primitivo’s where the alcohol is lower (perhaps closer to 13% as opposed to 16% – good example here, just in). At its best, it’s fantastic. Like the aforementioned Manduria… “peaty, smokey, tobacco-like aromas and flavours. Throw in fresh cigar and a blast of incredibly smooth, rounded black fruit sweetness and you’ve got a winner.”