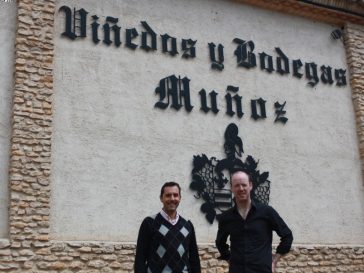 Founded in 1940, Viñedos y Bodegas Muñoz started as a small plantation in the town of Noblejas, in the heart of La Mancha. Today, it farms 400 ha of gnarled old vines, with an average age of 40 years; and its winemaking facilities include 1,500 ageing barrels and a state-of-the-art bottling line that ensures clean, fruity wines.

Muñoz is ranked among the pioneers of La Mancha’s wine community, and has for many years championed improvements in the quality and longevity of the region’s wines. The third generation of the family currently lives on the estate, above the 17th-century cellar where the best of Muñoz wines enjoy a “calm, transcendental” period of maturation.

The bodega also produces a second brand, Artero, named after the street where the winery’s founder, Blas Muñoz García de la Rosa, was born and raised.

Famous for windmills, saffron and Don Quixote, Spain’s La Mancha is also the world’s biggest single delimited wine region, encompassing a jaw-dropping 30,000km². Located on the meseta plateau (500-900m) 60km SE of Madrid, the extent of its DO-classified vineyards alone (which are only half the total) exceeds that of all of Australia’s combined!

The unforgiving climate sees little rain and summer temperatures of 45° Celsius and up. The Moors, themselves no strangers to hot places, christened the region ‘Manxa’, meaning ‘parched earth.’ Yields are tiny and the vines have to be spaced widely so as not to overtax the arid land, but the severe conditions make it impossible for pests to thrive and so the vines and grapes are unusually healthy.

La Mancha’s specialty used to be a pale but strong red wine that was actually made with white grape Airén tinted with red juice. But since the 1990s the trend has been to make ‘proper’ reds, mostly from Cencibel, the local name for Tempranillo, Garnacha (Grenache), Cabernet, Merlot and Syrah. Drought-hardy Airén, Viura, Chardonnay and (surprisingly for so torrid a region) Sauvignon Blanc make up the light-skinned complement.

Of the 2 million hectolitres of wine made in La Mancha each year, a variable but significant proportion is distilled and used for the characterful Andalusian spirit, Brandy de Jerez.