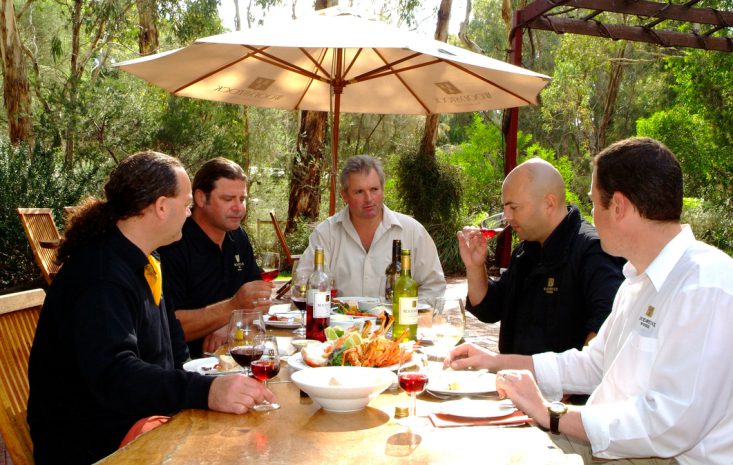 While Englishman John Reynall was laying the foundations for viticulture in 1830s McLaren Vale, it would really be the 1880s before the grape became more important than the original staple, wheat. Reynell would employ a young labourer called Thomas Hardy, who later acquired Tintara in 1876. As viticulture in the region gathered pace, two giants of McLaren Vale and the Australian wine industry were born – Château Reynella and Hardys.

Despite these two pioneers, McLaren Vale became known as the spiritual home of the small winery in Australia. In the early 1900s, by which time Thomas Hardy was the largest, around 20 small wineries produced predominantly red table wine and fortifieds. The main export was a dark coloured, high alcohol, tannic dry red wine with supposed medicinal properties, much of which went to England. By the early 1970s McLaren Vale had more small wineries than any other region in Australia.

Today’s major challenge is irrigation, as the underground watertable is very much depleted. There has been talk of diverting some water from the Murray River, although cost is proving to be the prohibiting factor. Summer rainfall is low so irrigation is essential. Site selection and the marriage of site to variety are all important; Shiraz, Cabernet Sauvignon, Grenache, Semillon, Sauvignon Blanc and Chardonnay all do very well in the right location. Riesling tends to be subtle and delicate in youth but ages well. Pinot Noir is used mainly for sparkling wine. Many producers are now experimenting with new and re-emerging varieties including Viognier, Sangiovese, Zinfandel and Verdelho.

If you’re ever lucky enough to visit Adelaide, McLaren Vale is well worth a visit. It is one of the most accessible and best geared wine regions for visitors and is well known for its great value eateries. This includes the legendary Coterie at Woodstock (pictured, with Scott Collett & Ben Glaetzer). The best time to go is during the winter to avoid the crowds. As well as great scenery, the ocean is never far away.

Since its introduction a little over 15 years ago, Chardonnay has, not surprisingly, established a stranglehold on white grape plantings in the region. The style varies according to site, winemaker input and vintage conditions and ranges from elegant, citrus-tinged wines through to richer, fleshier, peachy and buttery versions. Virtually every producer has a Chardonnay in its locker.

The cooler sites in McLaren Vale are well suited to Sauvignon Blanc. While vintage variation does play a role, in most years the wines have excellent varietal character tending to gooseberry and tropical fruit rather than more weedy, grassy flavours without becoming coarse or heavy. Semillon is often incorporated to very good effect as a blend component.

The wines from made from Cabernet Sauvignon are full bodied and rich, often with a touch of dark chocolate intermixed with black currant but they avoid overripe, jam-like characteristics. The tannins are plentiful but soft, and the wines have the structure for long aging. The significant amounts Cabernet Sauvignon produced in the region are blended with less rich wines from other parts of South Australia to provide body and structure in large volume commercial blends.

Just as in the Barossa Valley, the Grenache variety has enjoyed a spirited renaissance during the last decade. The older plantings produce incredibly richly flavoured wines, high in alcohol and with an almost juicy sweetness.

For much of the 20th century — as in so many of the premium wine growing districts of Australia — Shiraz was the backbone of the industry. It produces a densely coloured, richly flavoured wine that quickly develops a velvety texture and carries high alcohol levels with ease.

20% off Australia until the end of August, including Woodstock of McLaren Vale.