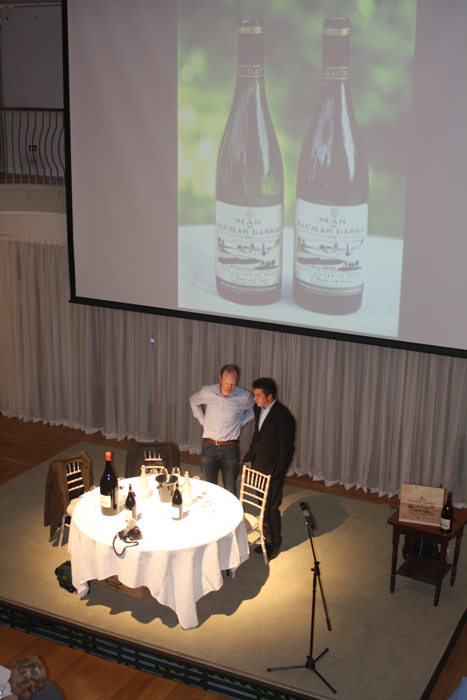 Last Friday night saw the much anticipated visit of Samuel Guibert of Mas de Daumas Gassac to Ballymaloe’s magnificent Grainstore, for an evening of talk, tales and tasting as we sampled across the Gassac range with around 90 enthusiastic guests.

The Grainstore at Ballymaloe – in preparation

The stage is set: Curious Mike and Samuel discuss posture. Or something.

Gary Gubbins of Red Nose Wine looks on as Samuel shows the next generation of Daumas Gassac master vigneron on the big screen.

Mike and Samuel (looking remarkably fresh the morning after!) in Curious Wines.

Sincerest thanks to Samuel Guibert of Mas de Daumas Gassac for taking time immediately after harvest to visit Cork and Ballymaloe; to the Allen family, in particular Darina and Rachel for their assistance in the pre-tasting photo shoots, and Hazel and Mrs Myrtle Allen for their hospitality on the night, both in the Grainstore and afterwards in Ballymaloe House; to Gary Gubbins of Red Nose Wine for co-hosting the event; and to Ballymaloe Sommeliers Samuel Chantoiseau and Colm McCan for their expert hosting and consummate professionalism on the night, and in particular to Colm for his ceaseless energy, creativity and contagious enthusiasm in planning and hosting another great wine event at Ballymaloe. We are truly indebted to you all.

And, finally, a huge thank you to everyone who came out on the night to enjoy Samuel and the wines of Mas de Daumas Gassac. We are most of all indebted to you.