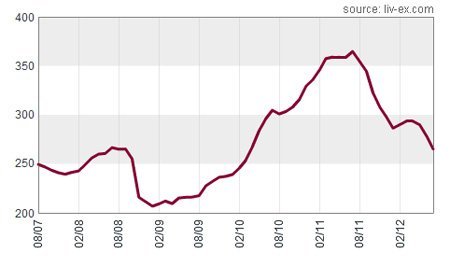 Providing you buy the right wine at the right time, not a case of Hardy’s Reserve or some battery acid in a counterfeit bottle of Petrus (it does happen… a lot), and sell at the right time before it has gone well beyond its sell by, there will be some fat cat somewhere to snap it up, give you a healthy return and either drink the lot or simply hoard it for an eternity. That’s the idea anyway.

In reality, you need to know what you’re doing if you’re involved with wine as an investment. It’s not the silver bullet for investors (what is?), even for those in the know. The graph, below, is from Liv-ex, which is widely acknowledged to be the fine wine industry’s leading benchmarks.

Here, we can see fine wine investments are not immune to market conditions. The big dip after August 2008 – that was the crash following the collapse of Lehman.

After the crash centrals banks around the world started to print vast amounts of money in an attempt to revive markets. This created a number of bubbles, including the wine bubble, hence the recovery enjoyed until June last year.

To put things in perspective, the LA Times reported a Chinese buyer spent $540,000 in September 2011 on a single lot of 300 bottles of Chateau Lafite Rothschild at a Christie’s auction in Hong Kong. Based on the Liv-ex index, that investor has lost around 27% of his investment so far. (source: testosteronepit.com)

Of course, this is not to say the market won’t recover, but the great thing about wine as an investment is you can always drink it. And in my opinion, that’s a safer and more enjoyable option.

To conclude, I’ll leave you with this email I received from my dad this morning, entitled “Interesting facts on Investments”.

If you had purchased £1,000 of shares in Northern Rock three years ago, you would have £0.00 today

But, if you had purchased £1,000 worth of beer one year ago at Tesco, drank all the beer, then taken the aluminium cans to the scrap metal dealer you would have received £214.00.

Based on the above, the best current investment plan is to drink heavily & recycle.