Grafting out a life on the rootstock 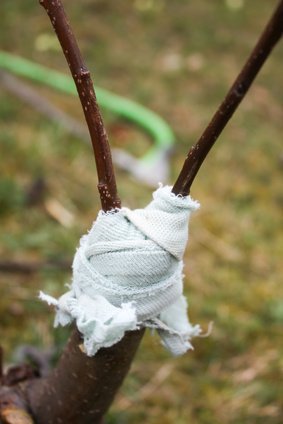 Just as the vignerons of mid-nineteenth century Bordeaux had manged to fight off the devastating powdery mildew (a fungal disease that was eventually halted with the use of a copper sulphate solution), up popped the ugly head of Phylloxera, the North American louse that loves nothing more than munching through juicy vine roots.

Phylloxera was brought across the Atlantic in botanical samples. Whether it was with or without the knowledge of their globetrotting carrier, it caused widespread devastation to vineyards throughout Europe. Farmers could only watch in horror as their vines rapidly deteriorated before meeting their end. This is why today, if you want a wine from truly old vines, you go to South Australia where Phylloxera did not reach (although neighbouring Victoria has suffered in the past). European vines are young in comparison.

After experimenting with chemicals and flooding vineyards, it was the age-old technique of grafting that was eventually used to rebuild the wine industry.

Grafting is an horticultural technique whereby tissues from one plant are inserted into those of another so that the two sets of vascular tissues may join together.

Couldn’t have said it better myself. So, by acquiring native vines of North America, which over time had developed a resistance to Phylloxera, the European vinifera vines were grafted onto the rootstock of American vines, because it was specifically the rootstocks of the European vines that were being consumed by the deadly louse, and in turn killing the rest of the vine.

In this age, the majority of wine producing vines are grown from European vinifera varieties grafted on to rootstocks which are mostly made up of American genes. Chile and South Australia have mostly ungrafted roots, as do certain regions within Europe. Sandy soil protected the Spanish Toro region from Phylloxera. New Zealand, Greece and so far England do not use grafted vines. But it comes with a certain risk, as Californian growers found out in the late 1980s when they were forced to replant with grafted vines after Phylloxera destroyed thousands of acres of vineyard.