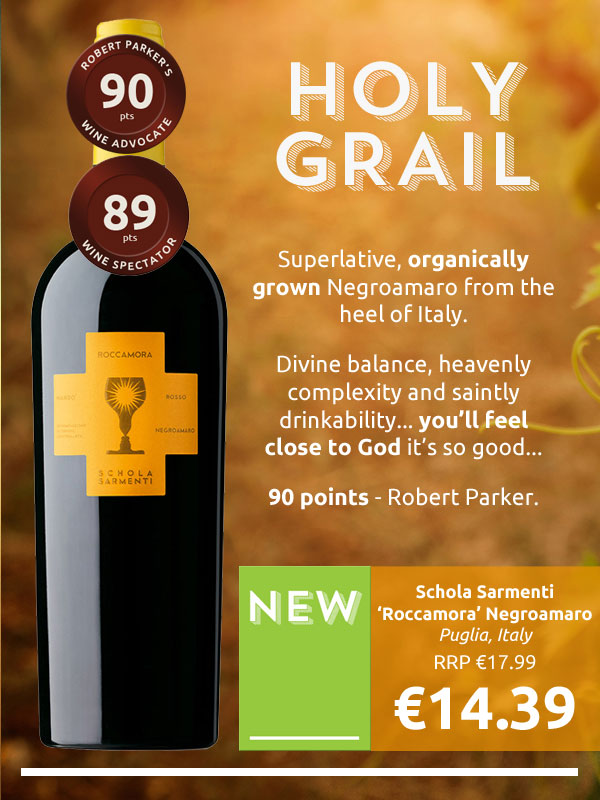 In search of the grail

WE OFTEN TALK IN CURIOUS about finding the grail in wine terms – those wines that look great, massively over-deliver for their price point, and give us something resembling a religious experience on drinking. We didn’t actually expect one of them to feature the grail on the label but here you go.

Introducing Schola Sarmenti, from Salento in Puglia – on Italy’s heel between the Adriatic and the Mediterranean seas. The winery building is over 150 years old but lay empty and disused for 50 years until extensive recent restoration brought it up to 21st century standards. Thankfully the vineyards were intact, with 80 year old vines farmed organically and tended by an old Apulian training system called Alberello. Fiano, Negroamaro and Primitivo are their specialised varieties – this is not Merlot or Pinot Grigio country.

‘Roccomora‘ (“give me mora that” in old Apulian dialect*) is the pick of the range for us. Negroamaro is the native grape, unaoked but rich and concentrated, an intense palate with a juicy/spicy persona – medium bodied, soft tannins, fresh acidity, flavours of black cherry, pepper, paprika, cola and liquorice – completed by divine balance, heavenly complexity and saintly drinkability. You’ll feel close to God it’s so good (and by the third glass possibly believe you are God).

Click to view the new Schola Sarmenti range, part of our 20% off Italy promotion.