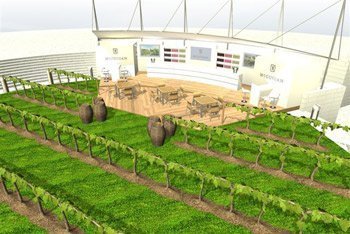 “Ah come on, don’t be daft!” is what you’re most certainly thinking. But it’s true. This September will see the transformation of a plot of urban concrete at Dublin’s IFSC into a living breathing Australian vineyard in the city.

The project is being engineered by one of the biggest global wine brands – McGuigans. Comprising rows of 60 year old Semillon vines in a turf soil, with an adjoining cellar bar and shop, complete with tractors, barrels and winemakers, the temporary vineyard will remain in situ from the 4th – 9th September. It has already been tried in Sydney, Melbourne and London in previous years, gathering plenty of interest from curious onlookers.

So what about permanent vineyards? Could Ireland itself ever be taken seriously as a wine producing nation, just as neighbouring England is now grooming a reputation for world class sparkling wine and very acceptable white and red wine? After all, the European Commission officially lists Ireland as a wine producing country.

Unfortunately, despite what the European Commission thinks, Ireland’s climate is, as we all know, pretty miserable. I mean surely I’m not the only one that dreams of a lengthy retirement in the south of France for nothing more than being able to enjoy the outdoors more, without being worried about a drenching or battling severe wind chills as soon as you step out the door. When we have the weather, there’s nowhere better, but unfortunately it’s rare. Very rare.

You only have to have lived in London for a short time to realise how drastically different the climate is, and that’s what separates a region of good winemaking potential and a region of not so good winemaking potential. I’ll not get into the reasons behind the differing weather systems, despite southern England only being a stones throw away from us in relative terms, but that hasn’t stopped some ambitious Irish winemakers giving it a go, even if it is with the use of poly tunnels.

Cork is a particular hot spot:

The Blackwater Valley Vineyard is located in Mallow, with five acres of vines. Even smaller is the Longueville House vineyard, also in Mallow. This is a mere 1.1 acres of vines, including Muller Thurgau and Reichensteiner, made into wine just for the restaurant. In Kinsale you can find the Thomas Walk Vineyard.