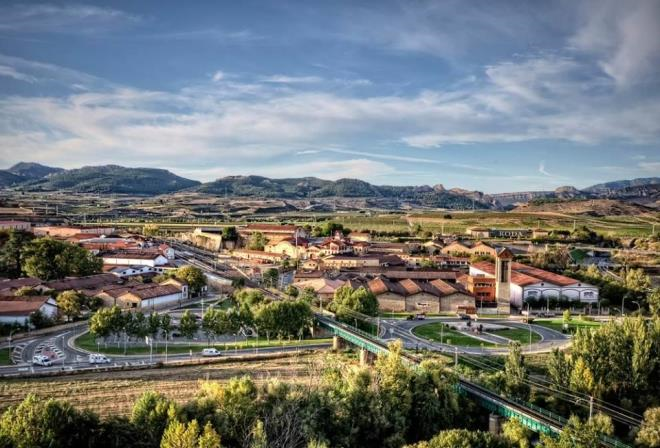 In the town of Haro, in Spain’s famous La Rioja region, lies a historic region often described as Haro’s ‘open air’ museum where at almost every corner you are greeted by bronze and stone statues depicting traditional trades. Even as you enter the town, contemporary sculptures relating to wine are seen at every roundabout. The tradition of wineries in Haro is closely linked to the history of the municipality. The Barrio de la Estación is part of the textural landscape and an emblem of Haro, a historically connected estate of different wine holdings which took shape in the latter half of the 19th century. Things began to change for this agricultural centre as transportation of wine progressed from horses to the ‘iron roads’ of the modern railway, built to take wine to Bilbao, and from there, by boat to Bordeaux and beyond.

The French winemakers whose vines had been ravaged by 19th century vineyard pests Phylloxera (aphid infestation) and Oidium (powdery mildew) arrived in La Rioja to acquire non-diseased vines and thus stimulated the growth and prestige of the region and contributed to its development. By 1891 they had planted roughly 68,000 hectares of vineyards and had built the first foundations of the warehouses in the Barrio. To date the area contains the largest concentration of historic wineries in the world, still revolving around the railway axis, and while today none of the original French owned wineries remain there are large scale established wineries on the plot and many small, underground and practically abandoned cellars that bear witness to more than 500 years of Haro’s association with wine. 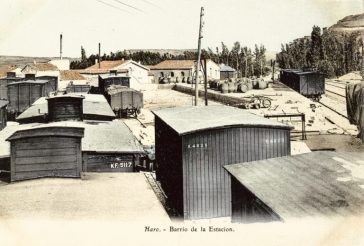 Migration was a part of life back then as it is today and it was in 1885 that Carlos Serres came to Haro from Bordeaux on a one-way journey. His entrepreneurial spirit led him to launch his eponymous winery in 1896 with a goal to create a winery with an international personality, making wines which would please the most discerning of international palates. In the intervening years there were trans-oceanic journeys and the cultivation of new markets, which made him a pioneering exporter of Rioja and a co-founder of the first Rioja Exporters Syndicate, precursor of today’s Control Board.

Until the mid-twentieth century, the winery was located in the famous Barrio de la Estación, next to Haro´s railway station. A need for expansion and the lack of usable space made it necessary to move to a new location, where it remains to this day. Respecting the historical and traditional heritage transmitted by its founder, the wines are made in concrete tanks and later aged in more than 5,000 American and French oak barrels in ageing halls.

So where does the artist Enrique Paternina fit into this story? A wine aficionado and proud Riojan, he might have been one of Spain’s most celebrated artists along with contemporaries Joaquín Sorolla, Ignacio Zuloaga and Pablo Picasso if life had panned out a little differently but today he remains only a fringe character in Spanish art history who never quite managed to achieve the same levels of critical acclaim.

Enrique Paternina García-Cid was born into a wealthy family in Haro in 1866. As a cousin of famed winemaker Federico Paternina, his maternal family owned land in the wider geographical area but Enrique’s passion was for drawing and painting. At the age of fifteen, he was already gaining praise as a cartoonist and won the first drawing prize at Orduña secondary school. At nineteen he moved to Madrid to enter the Special School of Painting, Sculpture and Engraving, where he studied for two years. In the summer of 1887 he travelled to Italy and toured the country, settling in the capital and rapidly integrating with the international colony of artists.

According to local expert Jorge Dóniga, the adult Paternina, once back from his restless travels and settled in La Rioja, was a landowner and landscaper, a bon vivant and a visionary of his time. The region was undergoing dramatic growth and viticultural development during the mid to late 19th century but the onslaught of World War in 1914 crushed European and International market links and much arable farmland and vineyards throughout the country was destroyed. Paternina lived throughout this period of decimation and reconstruction but his painting career was inevitably sidelined due to the grind of financial responsibility.

Characterised as an aristocrat and a gentleman he belonged to the wine bourgeoisie even though Phylloxera dramatically reduced the value of land and he was forced to sell his farms in order to live.

The last years of his life were spent in his hometown working on the land and tending to his livestock. Paternina did not sell his work in his lifetime as it proved to be at odds with his role as a landowner and his reputation dwindled as a result but one particular mural has raised his profile in this century and ignited fresh interest in his art in the region.

There is not much written about Paternina’s life but Rioja has hosted many festivals over the years trying to bring attention to the Haro-born artist and save him from obscurity. In 2013 Globartia Visual Art Company, a group of artists from La Rioja undertaking projects such as artistic street murals and design workshops reproduced Paternina’s painting ‘Costumbres de Haro’ or ‘The Drunkards’ on one of the walls of the Plaza de la Paz in Haro as the basis for the exhibition ‘La Rioja – Open Land’ in an attempt to spotlight the work of one of the least known cultural heros of Haro. 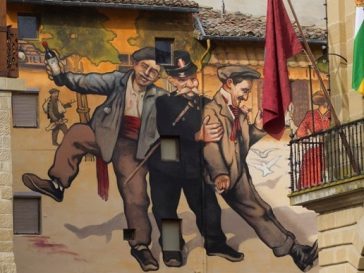 The characters the mural depicts are larger than life and exuberant from the influence of good wine and the scene hearkens to a different age. The mood is ebullient, the red sashes around the men’s waists chime strikingly with the red flag and the wine tones of the señora’s gown. One ‘drunkard’ dancing or hopping on one leg holds his bottle of Rioja aloft emphasising the ultimate treasure of the region and putting the observer in mind of the region’s history of perfect conditions for the development of its distinctive wines: the clay and limestone soils, the winter cool snap, the influence of the River Ebro. Perhaps the town is overdue a formal retrospective of its artistic legacies and Paternina’s contribution to the canon but for the time being, glimpses of his influence can still be enjoyed intrinsically bound up in the landscape and the stories Rioja has to tell about its rich past.

As for Carlos Serres, the brand is going from strength to strength. Finca El Estanque is a vineyard located south-east of Haro, barely 800 metres from the winery. Just as Carlos Serres was a pioneer in exports, Finca El Estanque was one of the first vineyards in Rioja to be espalier-trained. It was planted in the early 1980s, and its training system increased leaf surface exposure, thereby achieving better ripening in all grape varieties and improved cluster aeration and allowing for more environmentally-friendly growing practices with a reduction in treatments. It has a surface area of 60 hectares and mostly chalky-clay soils with a high gravel content and is planted with Tempranillo, Graciano, Mazuelo, Maturana Tinta and Viura, which are used to make Reservas, Gran Reservas and the limited production 1896 Finca El Estanque. In addition, the estate owns small properties spread over different privileged locations in Rioja Alta area that contribute to gain complexity and specificity in their wines but its humble origins belong in the Barrio de la Estación in Haro which continues to evolve with time and stand as an emblem of the progressive ingenuity of that period of history. 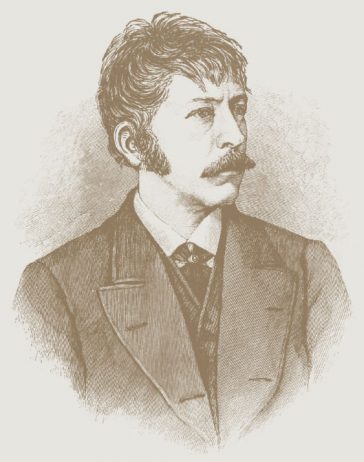 “I founded my winery in Haro so that the world would know the virtues of this land and its elegant wines.” Carlos Serres