Douro’s Quinta do Judeu: The Wise and Ancient Valley 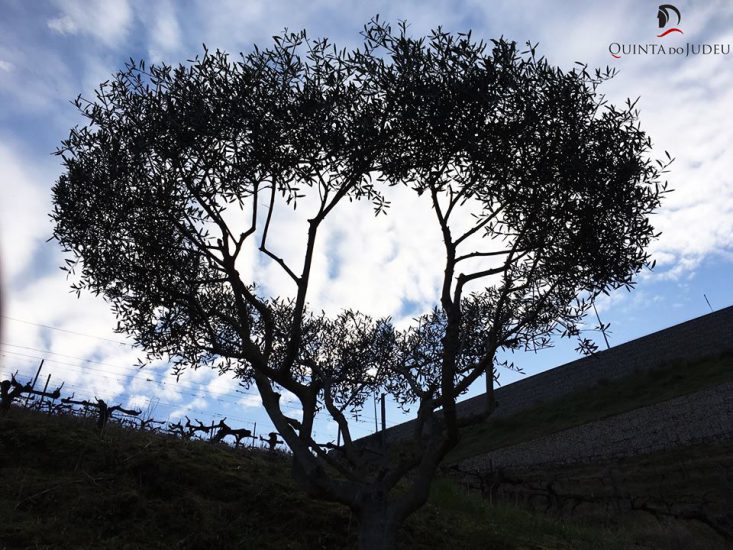 Douro’s Quinta do Judeu: The Wise and Ancient Valley

There is a story which has weaved its way, like old gnarled vine itself, into the history of the Alves de Carvalho family’s spectacular Douro valley winery, Quinta Do Judeu. It centres around the Judeo-Roman statue from which the winery takes its name, an imposing figure who stands watchful, safeguarding the estate and beyond to the verdant valley below.

The ceramic original, an inhabitant since before the family’s arrival in 1932, was stolen during a period of abandonment and decline but the family had the statue redesigned and remade in stone during the estate’s restoration. The new soldier’s sword was replaced by grapes, a nod to the promise of peace, great winemaking and continued harmony under their ownership.

Ancient legend whispers that the Jewish – Roman figure once stalked the land amongst the vines protecting them from unknown hostilities and the older generation in Peso da Régua talk of the warnings they received as small kids ‘to be good, or face the wrath of the soldier’ passing the statue on the school bus as it made its dusty, winding way home. They lived in fear of the statue coming alive and paying them a visit..

Nowadays the only living and breathing ‘guardian of the vines’ seems to be the family’s black labrador, Pinga, the unofficial mascot of the operation. 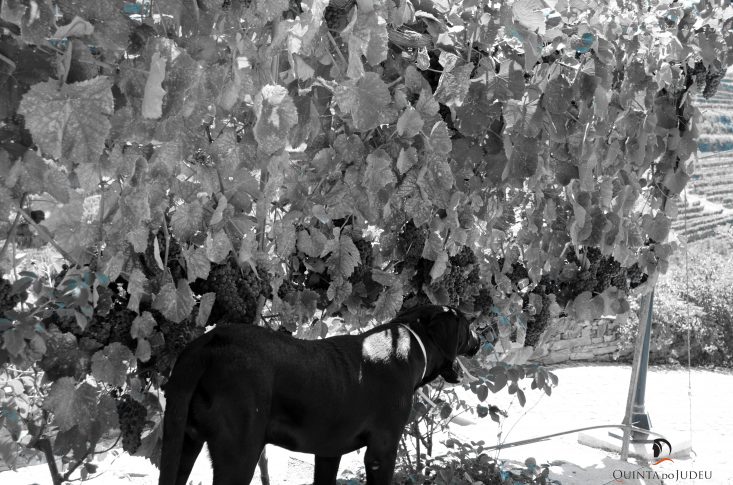 Pinga taking solace from the heat under vine curtain

André Marinho Pinto and his wife Claudia are the current vineyard managers and he lovingly re – tells the stories of his grandfather, Mr Manuel Carvalho, who used to talk to the Corgo River, winding its way past the winery in the valley below, during times of reflection. Glass of wine in hand he would ask the river and its surroundings for guidance. His grandfather’s silent contemplation of, and with, the abundant natural beauty of the area inspired the epithet used in literature and on the wine labels of Quinta do Judeu.

Andre’s father in law left Peso de Régua at a very young age and travelled to Brazil where he made his living and started his family but on his return to Portugal, with a renewed vision and passion to produce wines from his land, he bought Quinta do Judeu from his brother and two additional neighbouring properties comprising the 27 hectares of vineyards of which the estate now proudly boasts.

The day to day running of the winery is logistically challenging in terms of geography as the three properties Quinta do Judeu Corgo (Baixo Corgo sub region), Canelas and Covelinhas (Cima Corgo sub – regions) sit a distance from each other linked by what Pinto terms as ‘adventurous’ roads.  This disparity and geographical individuality works ingeniously in terms of blending however, as the very best attributes of each region can be utilized;  the freshness and elegance of the grapes gathered from the Baixo, the concentration and sublime power of the water – stressed Cima Corgo grapes and and the fresh aromatic style of highest altitude Canelas.

As the third generation of the family to manage the property, the weight of responsibility to fuse the old and traditional with new, modern techniques rests with Andre and although acutely aware of the need to evolve, he retains many of the original viticultural techniques first employed by his ancestors.

Our red wines are still traditionally foot trodden in the same lagares (granite tanks) as we had in 1932. We also ordered a panel made of traditional portuguese tiles, painted by hand by the same artist that sculpted the [new Jewish – Roman soldier] in the cellar

In the past, all varieties were planted together but several hectares of vineyards have been replanted making them fit for the use of tractors and other modern machinery.

There are no international varieties permitted at Quinta do Judeu and each native variety, among them predominantly, Touriga Nacional, Touriga Franca, Tinta Roriz and Tinta Amarela, has been painstakingly matched to the most beneficial spot for its continued health according to altitude, soil and sun exposure.

He is also rightly proud of the proportion of old vines retained by the property and talks of the care that has to be taken of these deep rooted ancient vines. In as dry and severe a place as the Douro is, it is important to achieve concentration, which they are able to achieve due to the depth their roots have found.  The cultivation and harvesting is more labour intensive but their uniqueness goes some way towards avoiding the ‘homogenization’ that can befall other vineyards in the Douro. 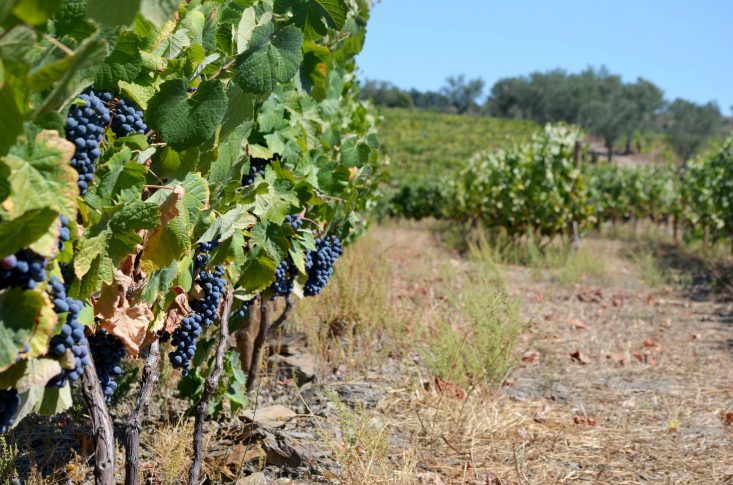 Vinification at Quinta do Judeu is the one area where scrupulous modernity of technique is adhered to. All grapes are vinified as separately as possible so that the winemaker has the greatest degree of flexibility when deciding upon the blend. In Andre’s words:

The final goal is to achieve what they always look for: balanced wines that scream out loud the place that they come from: The Douro!

The artistry is in capturing, in particular, the stony, harsh, lush unique ‘terroir’ of the valley and the deep and magical Corgo river that winds on past under the omnipresent eye of their aged stone sentry. This landscape has provided the family with their inspiration and will continue to do so for generations to come.