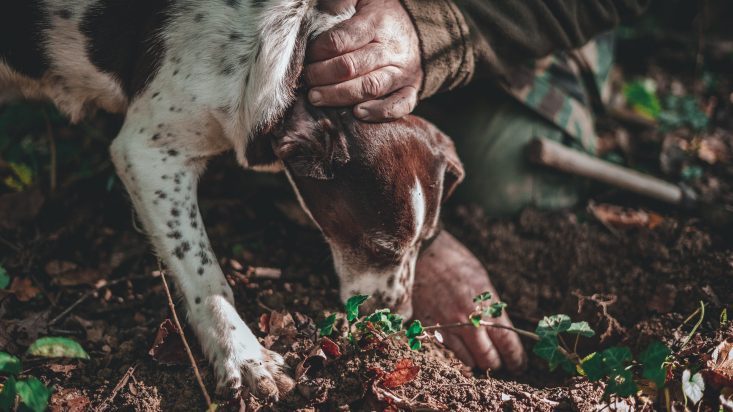 What is it about the mysterious tuber-like truffle that seems so luxurious compared to its more pedestrian cousin, the humble mushroom? The truffle belongs to that top-tier of niche culinary curiosities which also includes famously rare delicacies such as Beluga caviar, Iberico ham and Foie gras. Over the years it has inspired writers and poets such as Marina Tsvetaeva, Jana Prikryl, and Alexandre Dumas with its allure and illusory character. The novelist George Sand referred to the truffle simply as ‘the black magic apple of love’ but its complexity has provoked many an intoxicating passage where writers struggle to elucidate its elusively musky scent. 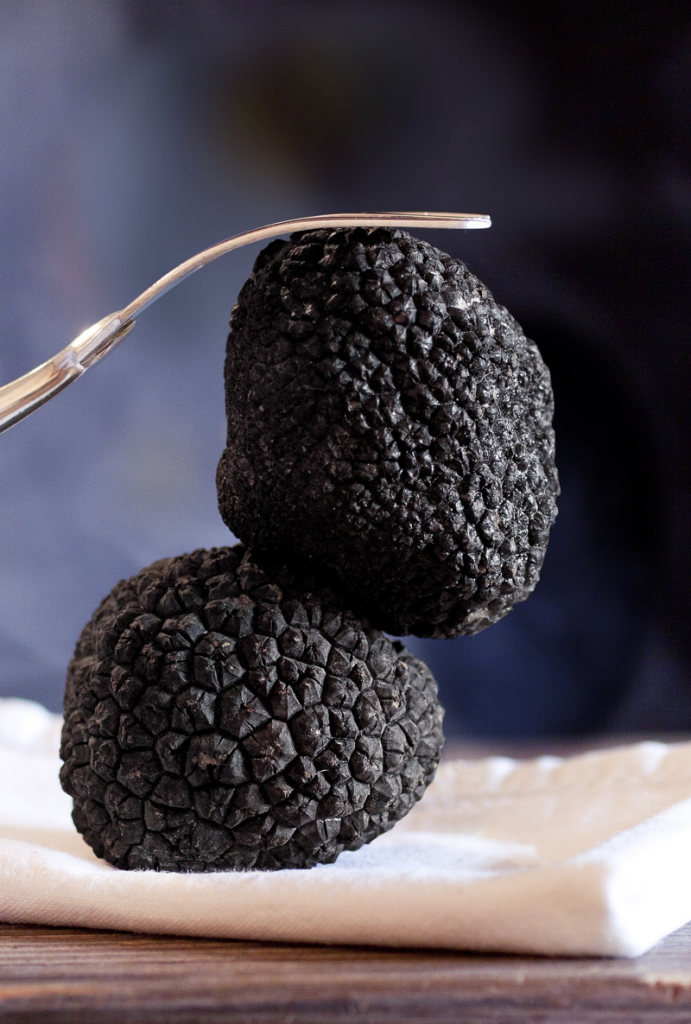 Early ancient Greek thinkers such as Plutarch wrote of the virtues of ydna (the Greek word for truffle) and Cicero referred to them as ‘the children of the earth’. The ancient Greeks were among many cultures who believed truffles were born of thundery weather and lightning strikes on trees and that the rush of electricity snaking through the roots could somehow kick-start a chain reaction which resulted in the birth of these strange gnarled fungi. Regarded as a delicacy in the fourteenth century amongst the wealthy in Italy and France they began to be seriously studied and their value grew. Eighteenth century English botanist Tancred Robinson wrote that “The Wet swells them, and Lightning may dispose them to send forth their particular Scent so alluring to the Swine”, proof that these mystical associations prevailed over time. In England, Tuber aestivum, the so-called ‘deer truffle’, was collected for many years as a food source, and until World War I, a small number of truffle hunters made their living by collecting the fungi with the aid of trained dogs, a practice that continues to this day.

“The Wet swells them, and Lightning may dispose them to send forth their particular Scent so alluring to the Swine”.

So what exactly are these strange subterranean crops? Truffles, or to give them their Latin name terrae tuber meaning ‘outgrowth of the earth’, are the fruiting bodies of ascomycete fungi that thrive underground. As they grow, they emit a variety of volatile organic compounds, which have evolved to attract animals that will then help to disperse their spores. Similarly, the etymological origin of ‘truffle’ comes from the Latin word tuber, derived from tumere, meaning to swell, and is a reference to its globular, potato-like shape. It is said that truffles are irresistible because their aroma is composed of chemicals that mimic mammalian reproductive pheromones, hence the compulsion some animals have to dig for them. Mature truffles feel firm, dense, and woody compared to the more spongy texture of the common mushroom and although its taste and smell can be notoriously difficult to describe, noted aromas include aged cheese, earth, vanillin, garlic, leather, gasoline, sulphur, onion, game-meat, polished green apple, anise, wild rose, butter and cotton candy.

Growing best in calcareous soils buried underground, they work in symbiosis with an array of host plants, nut bushes and deciduous trees, such as oak, elm, poplar, chestnut, willow, hazel, beech, birch, hemlock, fir, and pine trees. They grow best during spring and summer when there is warmth and rain and in recent years they have been scarcer due to drought conditions and harsh frosts which can cause irreparable damage. Species such as the famed white Piedmont truffle of Alba, and black Périgord truffles can fetch between €800 – 2000 per kg and sometimes much more.

Searching for black and white truffles requires experience and expert knowledge and centres around three main harvesting methods: searching accompanied by a dog, a pig or by flies. Today the majority of harvesters use specially trained dogs to search for truffles but the fly can seek out extremely elusive truffles, especially the species Suillia gigantea also known as Suillia tuberiperda who lays its eggs on top. The harvester must follow the fly and track where it chooses to land. It’s a technique that requires a lot of patience and a trained eye.

In 2000, American-born poet Gustaf Sobin published his novel The Fly Truffler, which described the art of truffle hunting in France. The novel follows the story of grieving linguistics professor, Philippe Cabassac who hunts truffles after discovering that eating them before bed induces dreams of his deceased wife. It was inspired by Sobin’s new life in Provence in which he became fasicnated by the intricate process of truffle hunting and exploring the psychic implications of the hobby.

A truffle hunting hound in Piedmont. Image by Andrea Cairone.

Today in Italy, a special kind of dog called the Lagotto Romagnolo (meaning ‘water dog’) is used to hunt tartufo but practically any dog can be trained to detect the scent. This pastime is explored in The Truffle Hunters, a 2020 documentary following a handful of local men who search for the rare and expensive white Alba truffles deep in the forest of Piedmont. Alba is sometimes called the ‘white truffle capital of the world’ in part due to its chalk, marble and dolomite-rich soils and as mentioned, the truffles from this region can reach eye-watering prices. Once the truffles have been discovered, it is extremely important to cover over the earth again to ensure that the fine roots of the host plants do not dry out and the truffles can continue to thrive and produce more gems in time to come.

Established in 1967 by Egidio and Angela, producer Cantina Bosio is situated in the heart of the Langhe (Piedmont), in pretty hills referenced in the works of famous Italian poet Cesare Pavese. Bosio is managed by Valter Bosio, his wife Rosella and oenologist graduate son, Luca with vineyards mainly located in San Stefano Belbo but also in Castiglione Tinella, Mango, Costigliole d’Asti and Castagnole Lanze. The grapes are gathered from different part of Piemonte, in Langhe, Monferrato and Roero. The story of Leda, The Truffle Hunter is really a tale about a six year old little boy who discovers a love for the mysteries of truffle hunting. Valter Bosio (the little boy in question) spent his life living on the land of a piedmontese winery, in Santo Stefano Belbo, a hilly area, covered by vineyards, in one of the most beautiful place in Italy. Says Bosio;

“I have four passions in my life: my family, my dog Leda, wine, and hunting for truffles. Truffle hunting is a tradition in Piedmont and my dog Leda is known for unearthing these highly prized tubers. This wine is made as a tribute to her.”

Truffle Hunter Barbera d’Asti, is comprised of 85% Barbera with the balance made up of Freisa, Grignolino and Dolcetto. A soft and fruity wine with juicy hints of plum, black cherry and lavender, it has a tangy fresh finish and perfectly expresses the rich alluvial character of the surrounding countryside. In the range of Bosio estate wines available at Curious Wines there is also the crisp and refreshing Leda Truffle Hunter Langhe Chardonnay 2021 and the 100% Barbera Passato Barbera’ d’Asti Superiore. For something enduring and long lasting, the svelte and brooding 18 month-aged Luca Bosio Barberesco 2018 is a little easier to locate in our warehouse than the precious truffles Valter and Leda spend their spare time searching for but no less intriguing and memorable. 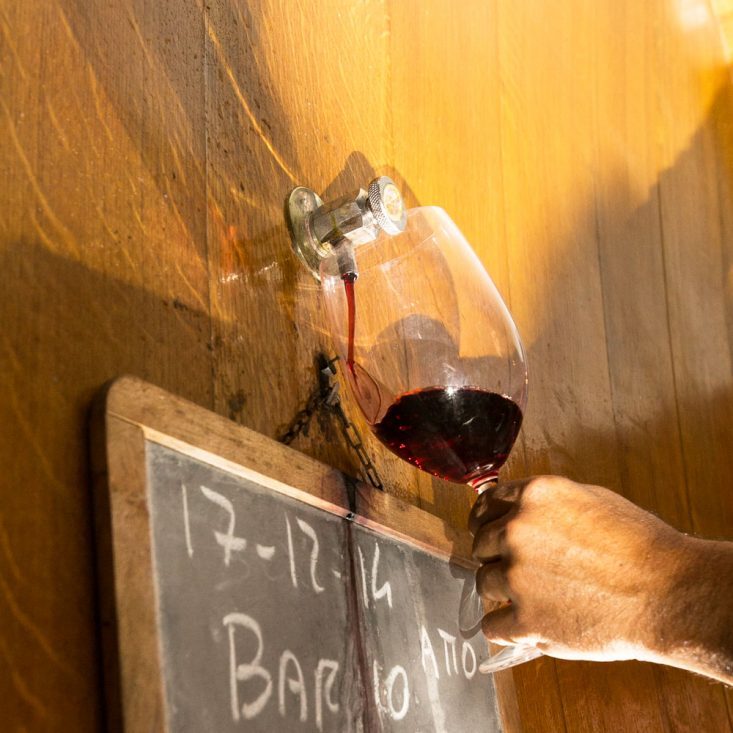