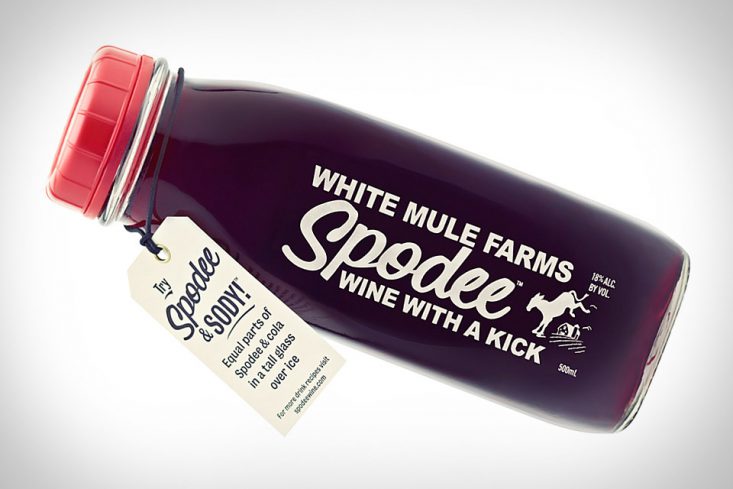 In Argentina Jesus juice is the name given to red wine mixed with cola. In Spain it is known as calimocho, where the cocktail is said to have originated. I am ashamed to say, even as a reasonably well experienced wine drinker (although I know I’ll never stop learning) I have never mixed red wine and cola. Nor lemonade and white wine, which I believe is another popular mix.

Simon Creasey writing for The Guardian last week reported on the popularity of still wine cocktails, with some of the world’s major producers having a go themselves. Jacob’s Creek, Hardy’s and Banrock have all launched limited edition ranges, perhaps to merely test the market, including strawberry & white peach Bellinis and Sauvignon Blanc infused with peach and mango.

Creasey also reported on a new fortified wine called Spodee (pictured), made with high proof moonshine, that you mix into cocktails, like a spirit. Moonshine is the name given to illicit high proof spirits (usually around 95% alcohol). The name was derived from early smugglers who produced and distributed illegal distilled products by night (in the light of the moon). Spodee gains inspiration from Depression era Hooch – strong, sweet, easy-to drink beverage made from a mix of country wine and whatever else was lying around the farm-fruits, herbs, spices and of course moonshine. This version is 18% ABV and comes in an old timey milk bottle.

There’s making rough wine palatable, and then there’s the classic cocktails. I had my first Prosecco Bellini at the weekend. This white peach nectar mixed with Italian bubbly was made famous by Harry’s Bar in Venice (or the other way around), which was a well known haunt of Ernest Hemingway and Orson Welles. In 1948 Giuseppi Cipriani created the Bellini which was inspired by the 15th century Venetian painter Giovanni Bellini.

Good cocktails are hard not to like. As for Jesus juice, I’ll make a judgement on that when I’ve tried it. It’s on my bucket list.