Chianti Classico with a story to tell 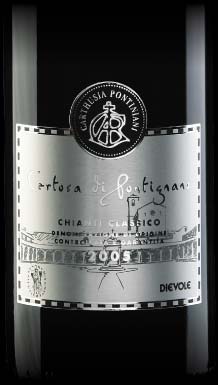 With marriage on the cards, the most important thing for me now is looking after the honeymoon. I’m hoping all that wedding stuff will just fall into place by itself. Anyway, Tuscany is where the two of us will be spending our first proper holiday together as a married couple, so I’ll have the chance to check out some wineries if I’m allowed (oh the pain of the thought). At the top of the list will be Dievole, a superb winery who have an interesting project going on in Siena that has caught my attention.

Certosa di Pontignano is an ancient monastery bordering of the states of Siena and Florence. It has a rich history originating from its construction in the 14th century, which included a church, cloisters, cells and other buildings to house twelve monks, three lay brothers and their servants. Situated in open countryside it was once vulnerable to attack, first of all from a band of Florentines who broke in 1449, and during the “Congiura dei Pazzi” in 1478 (a conspiracy against the Medici rule). The monastery was set fire to and then immediately rebuilt before being plundered again in 1554 by German and Spanish militias. Who’d want to be a monk living in the 15th or 16th century?

Despite testing times the heart of Certosa di Pontignano has been kept intact through extensive restorations helped by renaissance contributions during the late 15th century. Since then it has been relatively untouched, and now it houses the University of Siena’s Congress Centre, as well as boasting guest accommodation and a restaurant.

In May 2002 Divole took over the management of the land of Certosa di Pontignano with the University of Studies of Siena entrusting them with the rebirth of the monastic culture. Within its walls an Agro-Environmental Park has been created with vineyards and olive groves. The park is divided into two sections, one for specific cultivation (vines, olives, cereals, aromatic and medicinal herbs), and the other mainly dedicated to the landscape vocation, trying to combine the needs of preserving the historical and agricultural archaeology, and at the same time to give new life to the territory through modern, sustainable landscape management.

Dievole are now carrying on the tradition in honour of the vine-loving Monks with the Certosa di Pontignano Chianti Classico, made from Sangiovese grapes grown on the grounds of the old monastery. These vines are still relatively young, but with rigorous, quality-focused selection and time in oak, it’s the kind of wine I hope to be enjoying a lot of come September. Fresh up front red fruit, and a dry tannic structure that I think will go rather well with that Tuscan cuisine they all say is so good. I look forward with great anticipation and excitement.