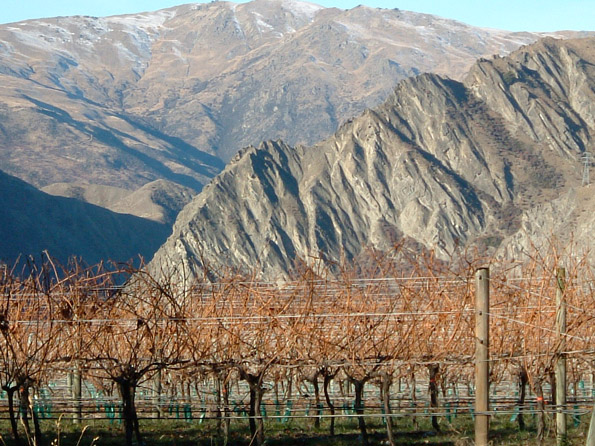 Like a yapping child it’s as fickle, testing and annoying as they come, but ah… the hugs for daddy when it’s being nice! At its best this grape is as good as it gets – fountains of wondrous rose tinted raspberry nectar with oriental spice rainbows and insane aromas of truffles and farty undergrowth. Quite frankly, all other wine is for pussies.

I couldn’t really have put it any better myself, Sam. Except for the last seven or eight words maybe. But it is true that Pinot Noir can be fickle and testing. When you get it right, it’s very good. Sometimes truly great.

Many of those greats come from Burgundy in France. Now Central Otago (or ‘Otago’ for short) in New Zealand’s South Island is crafting out its own name for great Pinot. ‘Burgundy of the New World’ perhaps, if not for its white wines, most certainly for its reds.

There is no other region in New Zealand that is more dependant on one single grape variety. Pinot Noir accounts for around 70-75% of Otago’s plantings. The climate is continental, unlike any other area in NZ. The diurnal temperatures (from the highs during the day to the lows during the night) and seasonal temperatures means there are similarities to Burgundy, although the wines still tend to be more fruit driven. The vineyards are protected by mountains and many are planted on sun facing slopes.

Within Otago there are six informal sub regions, including Gibbston and Bannockburn. Informal in the sense that there is nothing to say they must grow certain varieties, produce their wine in a certain way or note the sub region on the label. But each does have its own geography and terroir, making the variation between the wine of each vineyard and sub region distinct.

As a wine producing region Central Otago is still young and has much potential to fulfill. The famous Marlborough winery Cloudy Bay recently announced their own release of a Pinot Noir sourced from Otago vineyards, and even one of our own Marlborough winemakers is doing the same – Ant Moore Pinot Noir.

The white varieties include Riesling, Chardonnay and Pinot Gris, and although they have yet to receive the same recognition as the dominant red, there have been a lot of very promising examples produced. I suspect, for the time being anyway, Pinot Noir will remain number one because the region is so well suited to this noble variety that no one elsewhere in the country can quite replicate it in the same way. Also, with the glut of white wine coming out Marlborough, why play the same game?