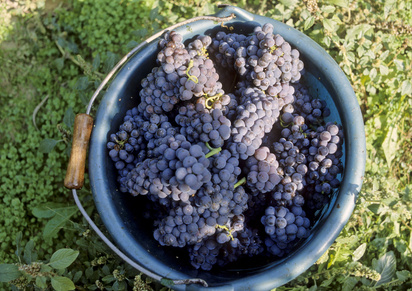 Cariñena is the largest Spanish DO in the wider region of Aragón, which also encompasses Calatayud, Somontano and Campo de Borja. It used to produce monstrous reds consisting of up to 19% abv until regulations were tightened in 1990. Now you shouldn’t see a Cariñena wine over 14%. That might make some people sad.

This is where the grape variety Carignan is originally from, now widely grown in southern France. It is still grown in Cariñena, but here it is known as Mazuelo. The main red grape variety is Garnacha (pictured), although Tempranillo and Cabernet Sauvignon are now becoming more prominent in its place, with lesser amounts of the white Macabeo (or Viura) and Garnacha Blanc also being cultivated.

Garnacha performs well in this hot climate, but in the 1980’s it didn’t really do itself justice with such high alcohol levels. Now Cariñena is known for its well-balanced, robust, but not too robust, red wines, and even produces some notable light and fruity wines.

So how does one get light wine out of hot, arid regions? Well, it’s made possible with ‘carbonation maceration’. Don’t let that term frighten you. It’s used in Beaujolais as well, and involves fermenting whole grapes as opposed to crushed grapes. The juice is fermented inside the grape resulting in very low tannins in the wine.

Some of the regions main co-operatives have modernised to a very high level and are staking their claim as having some of the country’s best value offerings. Among them is the co-operative behind the highly rated La Granja range. The good (or bad) news is they are all below 14% abv.