Home Blog Curious Wine Chatter Careful now: it’s wine but not as we know it

Careful now: it’s wine but not as we know it 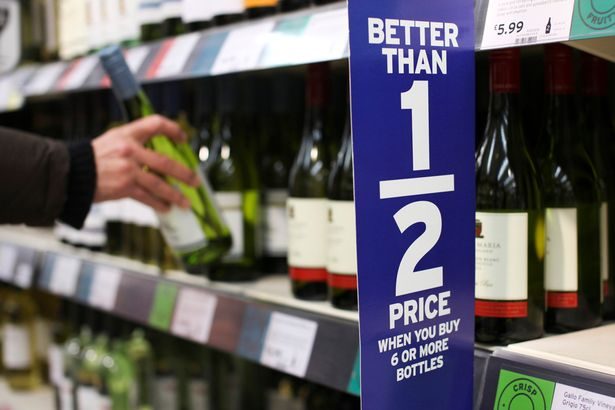 I met a mate yesterday for an old catch up and chat about business and family and other things. He ‘confessed’ to picking up a bottle of red wine in one of the low cost German supermarkets last week. “It was their cheapest bottle”, he told me, “I was just Curious to try it”.

It was, he continued, almost with a sense of relief, undrinkable, as if suitable reward for his perceived betrayal, like he was duty-bound to me to only buy his wine from Curious. “How much was it?”, I asked, admitting a small sense of satisfaction, “Oh, I can’t remember exactly but I’m pretty sure it was 5-something”.

At this point in the conversation, I went in to explaining the minimum pricing legislation introduced by the government in January. In essence, retailers can’t charge less than 59.25 cent per % alcohol in a bottle of wine, so a standard bottle of wine at 13% ABV can’t sell, under law, for less than €7.70.

I asked my friend what the alcohol level was on the wine and he didn’t know, it hadn’t even occurred to him to look. He still had the bottle in the recycling bin though, so I challenged him to fish it out and have a look when he got home. “I bet you it’s less than 10%”, said I, as I explained what the most likely explanation was.

Gavin Quinney, another mate and owner at Château Bauduc, had some predictions when the UK government issued their own revisions on wine taxes, also in January for implementation in February 2023. Now the Brits have made it a lot more complicated, and instead of minimum pricing have gone with an escalator of excise duty based on the ABV. We still have two main duty rates which cover the majority of wines sold here, €3.19 for still wine and €6.38 for sparkling; the Brits are going to have 27 duty rates in 5 months’ time, all based on the ABV in the bottle. 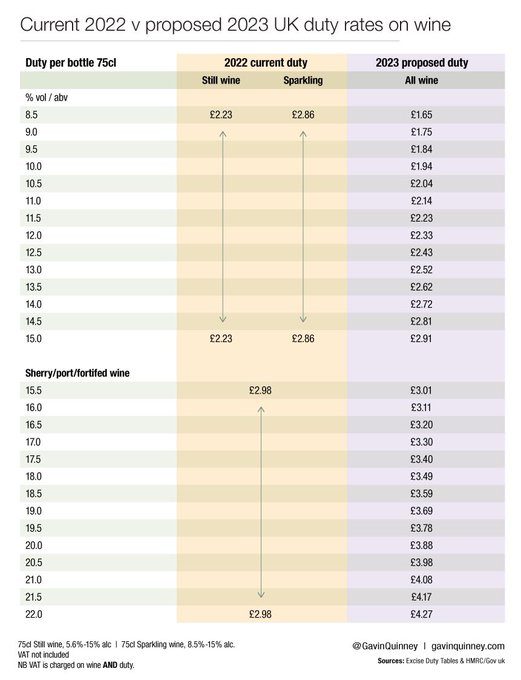 Between the changes in Ireland and the UK the effect is largely the same on price, lower alcohol = lower price, and in the brush of an exchequer quill large buyers like supermarkets suddenly have an urgent need for lower alcohol wines to appeal to price-focused consumers.

Unfortunately lower alcohol wines go against the trends of climate change and gradually rising alcohol in wines, hotter summers and autumns in grape-growing regions increasing sugar levels in grapes, and therefore alcohol levels on fermentation; winemakers have been working hard to keep alcohol levels down, for example by harvesting earlier when sugar levels are a little lower. You can’t get from 13% to under 10% by harvesting a little earlier though, and dealcoholising even a proportion of a year’s production is an expensive process, defeating the purpose of trying to produce cheap wine.

Gavin predicted, what is perfectly legal in a lot of wine producing countries, the wholesale practice of adding unfermented grape juice to wine, with the result of reducing the alcohol levels by simple dilution. He also predicted seeing a proliferation of lower alcohol wines, not advertised as such for the good of health or moderation, but as a way of keeping artificially low priced wines in supermarkets. Beware the description “wine based beverage”, it’s coming soon to a supermarket near you disguised as the real thing.

My mate sent me a message later with the back label of the wine he’d bought. It was 8%. He didn’t even cook with it in the end.