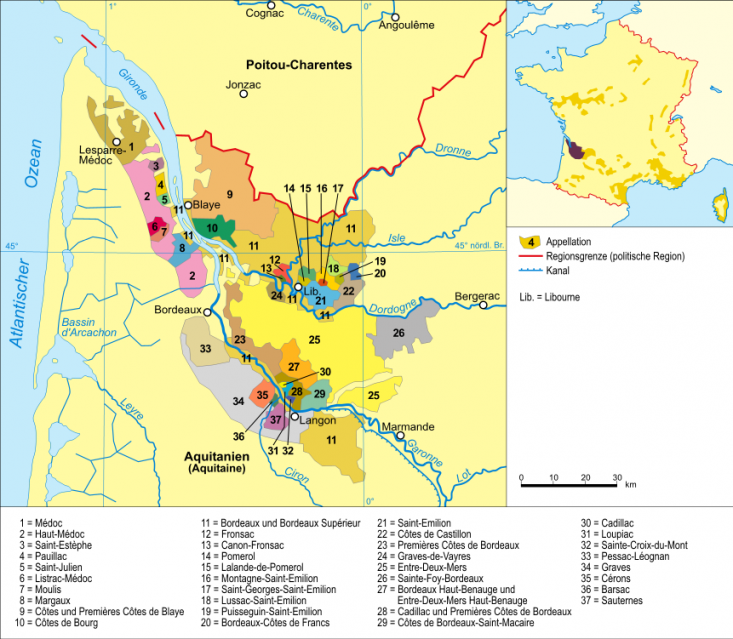 Moving on from Bordeaux insight: Médoc, The Graves and its sub-region of Pessac-Léognan lies next to Médoc, further down the Garonne River south of Bordeaux city. This is also on the left or western side of the river, known as ‘left bank’. The map below (source: Wikipedia) shows how the Gironde estuary splits into two rivers, dividing left bank and right bank, with the vast Entre-Deux-Mers lying in between.

Graves means gravel in French, and the best vineyards have plenty of it. From the mid 11th century to the mid 14th century this was the region that made a name for Bordeaux. The city itself made for a trading hub as demand from a thirsty export market grew, and then as competition arose from neighbouring regions and countries, demand fell away and Graves soon got used to playing second, third, or fourth fiddle.

Today, quality is probably at the highest it’s ever been. Vineyards seem to be everywhere. Between houses, businesses and industrial estates, the love of the fruit of the vine is holding its own in the fight against urban sprawl. The grape variety of choice, mostly Cabernet Sauvignon, is followed by Cabernet Franc, Merlot and a little Malbec. Around a quarter of the regions wine is white, made from Sauvignon Blanc and Sémillon.

Graves has a slightly warmer climate than Médoc. This coupled with the low rolling hills, providing vineyards with a better aspect to the sun, allows for better and earlier ripening of fruit. In addition, the gravelly soils aid drainage, which in some parts of Médoc can be problematic. The sites to the north near Bordeaux, where the topsoil is typically gravelly, are renowned as the best in Graves. In 1987 a sub-region was established to encompass this area called Pessac-Léognan.

Graves does two styles of white: fresh, unoaked, bone-dry, racy whites with hints of apricot and the other, usually more expensive style from the best estates, are aged in oak showing again apricot-like flavours but with nut and vanilla characteristics and a creamy texture.

The reds are distinctly different from Médoc, with deep earthy tobacco, blackcurrant, plum fruit and creamy layers with firm mineral nuances. There’s also plenty of inexpensive gluggable reds coming out of the region, with upfront ripe plummy fruit, earthy flavours and oak spice. They tend to be lighter and more supple than Médoc reds with a bigger proportion of Merlot in the blends.

When the Bordeaux Wine Official Classification of 1855 was formed, all sixty-one great classsified wines came from the Médoc region bar one. The exception was the premier cru of Château Haut-Brion in the Graves region.