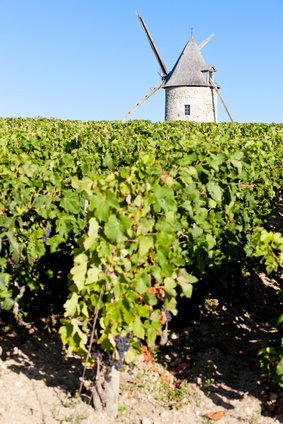 Okay, so we’re read up on Médoc, Cabernet Sauvignon heaven. Check. The Graves & Pessac-Léognan, where we find earthy, yet lighter and more supple Cabernets. Check. Saint-Émilion & Pomerol, where Merlot claims its stake as the greatest grape of them all. Check. But before our Bordeaux sale ends at the end of the month, we can’t afford to forget The Côtes, which we’ll cover now, and what goes on between the rivers, which we’ll look at next week.

We literally can’t afford to ignore The Côtes because this is where a lot of ‘everyday’ Bordeaux is. The kind some of us might reach for at lunchtime on a Sunday without a second thought. And the diversity found within offers up so many different styles of wine at varying prices to suit every budget. Go for the everyday wine, or pay a little more and you can find some real gems in the mid-range and high end price bracket.

Initially one might think Côtes de Blaye isn’t suitable for vine plantings. A lot of it isn’t, but vines only make up around 15% of the agricultural land. Interspersed between the marshes or on risen plots of land or sun facing slopes, healthy vineyards, many of which were originally established by the Romans, are tended lovingly by growers.

Parts are well suited for Ugni Blanc and Colombard, also used in Cognac as well as making some soft, rounded and fruity whites. But Côtes de Blaye is mainly about the reds, the best areas which the Romans discovered were the areas of limestone either on slopes or on a plateau. Merlot does well here. Further inland from the town of Blaye there are clay-rich slopes responsible for some lovely ripe and soft reds. In the sandy, clay and gravel terroir of south east Blaye it is possible in patches to ripen Cabernet Sauvignon to a good degree, but Merlot remains the dominant variety overall.

Côtes de Bourg is further downstream just before the river splits in two. The South Eastern part of Blaye almost encircles the much smaller area of Bourg, and despite being very close it does a better job at ripen Cabernet Sauvignon. In the areas where the limestone is broken the Cabernet roots can burrow deep down into the rock, and elsewhere where the soils are warmer it can ripen beautifully. The limestone, should it not stump ripening, can give the grape a refreshing acidity, which goes well to improve the already excellent structure of Cabernet. It all makes sense when you blend the two as you’ve got the structure of Cabernet Sauvignon and the generosity of Merlot.

Now we’re heading further south-east once again, on what would still be regarded as left-bank, out beyond Saint-Émilion. In fact, it’s more or less an extension of Saint-Émilion, with some top estates buying up prime stretches of land. The limestone plateau that has run all the way from Côtes de Blaye, rears its head in the Saint-Émilion Côtes and also in Côtes de Castillon. The wines are quite similar to Saint-Émilion, with Merlot being the preferred grape to thrive in limestone vineyards. Again, the best sites are when the vine roots are able to burrow down and pick up some nice acidity. Like Côtes de Bourg above, there’s some real potential for serious investment, serious fine wine and serious prices, but plenty of bargains are still to be had.

Côtes de Francs is a small area fixed to the northern end of Côtes de Castillon. There are flashes of brilliance in this dry climate Côtes, but if there is a complaint it’s that it can be a little too cool in places, so grapes may need to hang for longer. Who’s not to say global warming can’t sort that, but the best wines are interestingly different with minerally, herby and almost buttery-blackcurrant flavours. One to keep an eye on, for sure.

This strip of land lies between the two rivers next to Entre-Deux-Mers, running up the right side of the Garonne. On the other side of the river is Graves & Pessac-Léognan. Where much of Entre-Deux-Mers is perhaps better farming land for the standard food crops, the land of Premières Côtes de Bordeaux is less fertile – a good thing for wine. Less loam and more limestone and clay. When growers push for ripeness the reds are fruity and take to oak nicely. When you move south it is sweet wine territory, and the conditions are less suited for red grapes.

For 20% off Bordeaux until the end of August, click here.