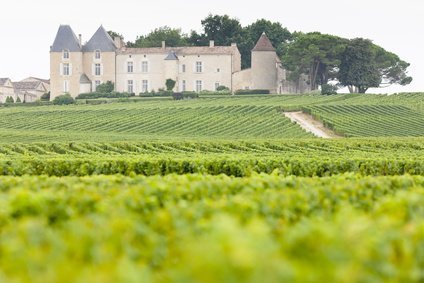 The fifth and final installment of our Bordeaux insight, we enter ‘Entre-Deux-Mers’, or to us, ‘between the rivers’. We’ll also have a glance at the terrific sweet white wines of bordeaux.

To view the previous four posts in this series, click here and scroll down to view.

Entre-Deux-Mers is a 50 mile wedge of land plonked between the Garonne and Dordogne rivers in south-eastern Bordeaux. Wines produced here are bottled under the basic AC Bordeaux appellation. It’s not a region that gains much notoriety, and it shouldn’t either apart from a handful of producers.

In the 1960s the wines of Entre-Deux-Mers were labelled ‘vin de table’, or table wine. They used to produce vast amounts of cheap, sweetish wine white and ship it off to whoever could drink the stuff. When that fashion went by the wayside, Cabernet Sauvignon became trendy, so they tore up their vines and planted Cabernet. The problem with Cabernet is, as discussed in the previous posts, it needs warm soils to ripen fully. Most of the region is loam, a cold soil, so it was difficult while consumers were demanding ripe reds.

Merlot had more success in the 1990s. It can tolerate cold soils and ripens earlier. Some of it wasn’t bad, however, the problem was the producers weren’t making anything on it. One way of achieving ripeness is to cut grapes off the vine to allow the remaining fruit to ripen sufficiently. This required labour which couldn’t be afforded at such a low sell on price.

Today, much of the region seems to have got to grips with reality. If they’re not planting potatoes, the giant co-operatives are still making cheap wine, which is nothing to write home about, but much of the dry whites labelled AC Bordeaux are commendable for the low price. Conglomerates aside, some producers have, and are, making a name for themselves, particularly those who have found better soils and micro-climates (there are some fantastic patches of land scattered throughout the region), and invest properly in good winemaking equipment, barrels and personnel.

The appellations of Sauternes and Barsac, just to the south of Graves, are known for their sweet wines made from grapes affected by noble rot. This occurs when the Botrytis fungus infects the grape, concentrating its natural sugars, and only happens in small pockets around the world where the moist conditions are just right. The likes of the Cérons appellation, north of Barsac, produces wines that are lighter and not quite as luscious and sweet. They are perhaps preferred by some for being less sweet.

Sémillon is the grape variety most susceptible to rot and so is common in these parts, along with some Sauvignon Blanc and Muscadelle. Sémillon brings body, richness and honeyed, citrus flavours, with Sauvignon Blanc bringing a racy freshness. Peach, apricot, pineapple and a creamy nuttiness ensues in what are some of the world’s greatest dessert wine, particularly those of the famous Chateau d’Yquem (pictured).