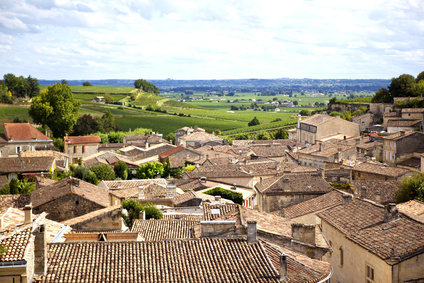 If you missed the previous two blog posts focusing on the left bank, click on the ‘Bordeaux Insight’ tag at the bottom of this post and then scroll down to view.

With Cabernet Sauvignon reigning king on the left bank of the river Dordogne, the world’s great Merlot’s strut their stuff on the right bank, with the finest examples coming from Saint-Émilion & Pomerol. The ‘right bank’ is the informal designation given to wines produced on the right side of the river, which are different in style and normally Merlot dominated compared to the Cabernet dominated wines on the left side of the river.

At first it’s quite extraordinary trying to get your head around the difference one side of the river can make to another.

Understanding ‘terroir’ (a sense of place) is the first step, and it’s a relatively easy concept to grasp when you know where to look.

Terroir is the special characteristics that the geography, geology and climate of a certain place bestow upon particular produce such as wine, coffee or tea.

On a whole, the right bank is drier than Médoc on the left bank. The summers are warmer and the winters cooler. The best vineyards are located on the limestone areas around Saint-Émilion or on gravelly land near Pomerol. Merlot actually performs best on the clay based vineyards, whereas Cabernet Sauvignon does well on gravel and Cabernet Franc on limestone. The region is generally flat with some undulating hills and steep rises south of Saint-Émilion. Most producers on the right bank will begin to harvest before those on the left bank, with Merlot ripening on the earlier.

In Saint-Émilion Merlot again rules the roost, with Cabernet Franc playing a smaller part in most blends. There’s a lovely softness to the wines, quite a contrast to those of Médoc. The tannins are supple and there’s a chewy, fruit cake-like richness with an almost buttery, caramel sweetness. Many of the basic wines of Saint-Émilion are good to drink from a year or two old with some taking longer to reach their peak, perhaps 3-4 years. The best from around the limestone slopes of the town itself can age beyond 10 years if stored properly.

The neighbouring region of Pomerol is small (barely 2,000 acres), yet probably the most famous of all Bordeaux appellations. The home of Château Pétrus, one of the world’s most expensive wines, the secret lies in the soil. Where most vineyards in Bordeaux are planted on anywhere but clay soils, the key to Pomerol is the deep, wet, blue-black, sticky clay soil which has broken through to the surface from deep down. Only 50 acres of Pomerol has benefited from this magical topography, of which Château Pétrus has more than half almost entirely planted with Merlot, one of the few red grapes to thrive in cold, heavy soils.

I have never tried Pétrus and I probably never will. So I’ll refer to the tasting notes of others, who report a body and richness like no other wine. A buttery, creamy texture interplays with plummy fruit and blackcurrant. Nutty, spicy, chocolately mint, mushroom/truffle. By the sound of it, tasting notes that could run the length of a small novel.

Affordability comes into play on the other side of the River Barbanne, where producers try to live up to the quality and style of the best of Saint-Émilion & Pomerol, but in most cases rarely succeed. However, where Saint-Émilion & Pomerol have half the world’s super rich queueing for obscenely expensive wine, average Joe’s like me can find good value, affordable pleasures from the pretenders.

Arguably the prestigious names of Saint-Émilion & Pomerol should not be shared by satellite regions and producers, but one of the best is Lalande-de-Pomerol, showing beefy, plummy, minerally reds that are grown and made within only a few kilometres of Pétrus, but on limestone and iron based soils topped with a mixture of clay and gravel, thus creating something stylistically quite different. The satellites of the top Saint-Émilions are not even next to each other, with the four communes of St-Georges, Montagne, Lussac and Puisseguin only associated with Saint-Émilion by the name on the label, displayed, for example, Lussac-Saint-Émilion. These again are smooth, plummy reds with rustic earthy characteristics, many representing great value in their own right.

For 20% off Bordeaux until the end of August, click here.