Bleasdale: There's a story in every glass (1/3) 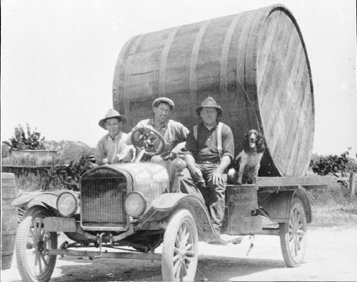 This month we’re celebrating over 160 years of unbroken winemaking history. Direct from Langhorne Creek, every Irish wine drinker now has access to one of the most exciting range of wines Australia has to offer. Our range from Bleasdale is on offer until the end of January.

Three weeks after the Battle of Waterloo in 1815, Frank Potts was born into an England of hope and glory. Salt seemed to seep through his blood, for he joined the Royal Navy at the age of nine, taking his first commission on Nelson’s famous HMS Victory. Barefoot and bare-chested he sailed around the world avoiding cholera and the cat of nine tails before arriving in South Australia in the first landing party in 1836, with just a chest of carpentry tools to his name.

He started colonial life as a 21 year old boat builder in Port Adelaide, was promoted to harbour master and pilot, constructed his own ketch Petrel, and became a trader of onions, wheat, sea birds, seal oil and skins from Kangaroo Island to the mainland.

Selling his boat and first home in Port Adelaide, he purchased the first sections of land on the fertile Bremer River at Langhorne Creek, cleared the land and started farming.

He planted his first vines in 1858 selling wine to Thomas Hardy, before expanding his holdings to 30 acres in the 1860s.

One of his contemporaries Alexander Tolmer, the SA Commissioner of Police called Frank one of the most extraordinary characters he had ever met:

“‘A thin spare figure with long unkempt hair… altogether a most uncouth looking person, and yet this man is a perfect genius – there is not a single thing mechanical or otherwise… which he does not succeed in accomplishing.”

This included designing and building his own irrigation pump and aqueduct out of split red gum trees to irrigate his vines and constructing wine vats, barrels and casks – all from red gum. In fact one of his more practical red gum inventions was the five-seat long drop toilet seat for use by unabashed vineyard workers.

But the greatest achievement was a basket press, constructed in 1862 using a ten metre, 3.5 tonne red gum tree as a lever rather than the traditional screw mechanism. Frank claimed the technology, which he had first observed in Portugal, provided a slower, more gradual pressing of the grapes without any mechanical intervention.

Today the National Trust listed winery is home to the latest winemaking technology, but on special occasions the winemakers still indulge in the distinct pleasure of producing a reserve wine with a 140 year old red gum wine press.

Frank also borrowed other ideas from history. Seeing the annual silt-laden floodwaters of the Bremer disappear into Lake Alexandrina each year he developed floodgates which diverted a metre of water across his entire vineyard – nothing less than an Egyptian inundation. And when vintage was finished he let his cows in to chew at the canes – an early version of minimal pruning!

Why the name Bleasdale? Another story has it that Frank liked the preachings of a Reverend John Ignatius Bleasdale who advocated a “sober, wine drinking community in SA which excluded ardent spirits”. An anti-temperance priest seemed to suit Frank’s sense of humour, so he immortalised him in his winery.

Never one to sit still, Frank handed the winery over to his son Frank Potts II in the 1870s and resumed his profession of boat building, constructing paddle steamers and barges which plied the River Murray until after the turn of the century.

He even started a Dad’s Army of local militia-men who he equipped with a motley collection of shotguns and pointed sticks to patrol the local area, when fears of a Russian invasion of Australia were imminent in 1877.

A little while before this plucky patriarch died in 1890, Frank made one parting gesture. He constructed his own coffin – yes out of red gum – and kept it under his bed as a storage container for apples until his due date!