Bleasdale: The vineyards & the winemaking at Langhorne Creek (2/3) 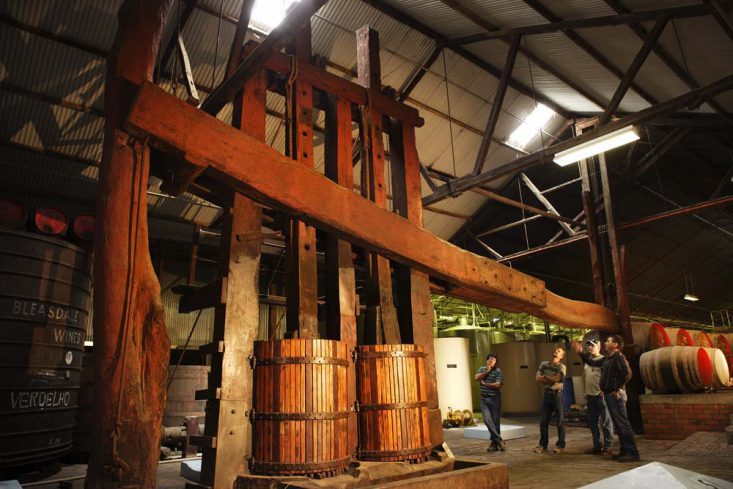 This month we’re celebrating over 160 years of unbroken winemaking history. Direct from Langhorne Creek, every Irish wine drinker now has access to one of the most exciting range of wines Australia has to offer. Our range from Bleasdale is on offer until the end of January.

Ironically, it was Frank Potts’ abilities as a sailor that led him to Langhorne Creek – and the life of a landlubber winemaker and vigneron.

He saw the potential of the region when he explored it in the 1850s, convinced that the stands of tall red gums promised fertile soils and reliable water.

Langhorne Creek receives an average annual rainfall of just 380mm per year and flood events provide enough moisture in the rich deep soil profile of the flood plain to carry vines in these areas through the dry summer months. The majority of the vast vineyard plantings of the area use modern and efficient drip and sub-surface irrigation practices to maintain the water needs of the vines.

Despite this, much of the region’s fruit went into multi-regional blends and wasn’t acknowledged until the 1990s when a small group of long-term family growers – including Bleasdale – started promoting 100% Langhorne Creek wines.

Langhorne Creek is now the centre of a vibrant grape growing and winemaking community which regularly wins national and international awards. Close to the boating, fishing and surfing attractions of South Australia’s south coast, it is a great place to visit and taste at cellar door.

A picture of how it all comes together

Watch for the cobwebs as you clamber down the old redgum ladder into the bowels of Bleasdale winery. Duck your head and enter the old domed cellar built in 1892 and gaze around the walls at French and American oak puncheons, hogsheads and barriques brim full of Cabernet and Shiraz.

They are all destined for Bleasdale’s super-premium Frank Potts and Generations releases but that’s years away.

For now each parcel of each variety is matured separately, with up to 200 different wines all expressing their own individuality based on micro-climate and soil type.

Wander on to the redgum tasting bench where in September every year you’ll find senior winemaker Paul Hotker and his winemaking team murmuring as they taste and spit red samples. This exhaustive three-day examination of every parcel of wine, aided by two independent judges, will create the script for each final blend to be assembled.

The outcome is not just about art and romance. Local growers wait anxiously for this time of the year when they know how their fruit will be graded and whether they receive a bonus for quality, rather than tonnes produced. It’s the way it should be, in the pursuit of quality

Being a nautical man, it’s not surprising that Frank Potts chose to plant a vineyard in a place that for a week or two occasionally becomes an inland sea. But how this natural bequest has been used by succeeding generations of the Potts family is more to do with ingenuity than miracles.

Bleasdale’s vineyards are situated on the fertile flood plains of the Bremer River, which runs parallel to Langhorne Creek. The region still experiences natural floods from the high rainfall that gushes out of the Adelaide Hills and heads towards the sea from time to time. It occurred to Frank that with the addition of floodgates across the river he could control the water for a short period and give his vines a deep soaking drink just before the parching Australian summer.

The other benefit is that the deep alluvial sandy loam soils have been built up by successive deposits of silt and nutrients which are left behind after each flood – a process which is about as close to Mother Earth’s seasonal rhythms as growing grass.

Like the Barossa and McLaren Vale it has relatively modest natural rainfall and hot summers which limit crop vigour and yield and create a healthy environment where herbicides and fungicides only need to be used sparingly.

The resultant red wines have fine tannin and acid structure for complexity and longevity while the white wines of the region have texture and length.