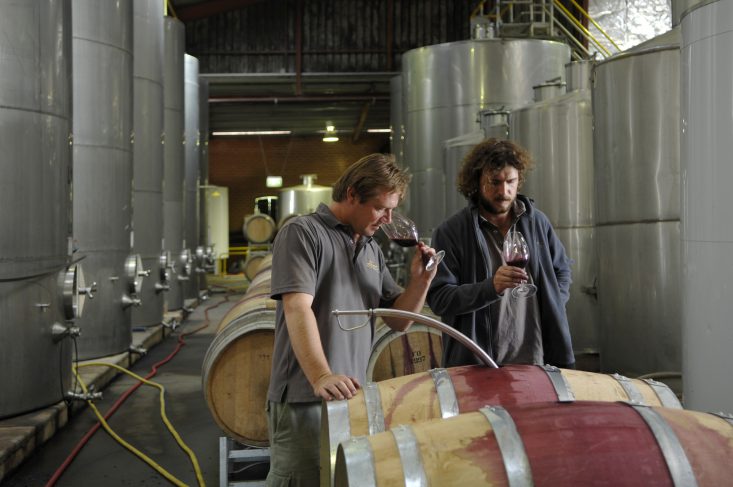 The most significant part of the year in Australian winemaking is long over. Harvest, or the “crush” as it is known, can for some areas start as early as January and for others end as late as June with the picking of late harvest grapes used for dessert wines. The main action happens between February and April, which goes from the end of their summer and into mid-autumn.

With so many reds and some whites still in barrel it’s hard to tell exactly how good a year 2012 will turn out for Australia. The noises coming from the winemakers we partner have been very positive. The wine critic and wine writer who would be considered the independent authority on Australian wine also noted praise and optimism, specifically for South Australia, below.

“I cannot remember a vintage having received such hyperbolic praise right across the board, covering all regions and all varieties, as there is for 2012. Words that came up repeatedly were ‘fantastic’, ‘outstanding’, ‘sensational’, ‘best in my lifetime’, ‘perfect in every way’, ‘density of colour’, and ‘development of flavour at moderate alcohol levels’, and one winemaker, who couldn’t wait to give it a numeric rating for next year, gave it 11/10. The only sour note is the low yields, seldom less than 20% below average, and for some half of the average.”

Quite an improvement by the sounds of it on the generally mediocre 2011 vintage, at least for Barossa Valley anyway. Halliday also noted good subsoil moisture and good canopy health in Langhorne Creek, with crop levels below average for Shiraz and Tempranillo, but higher for Malbec. Overall, the red wines were every bit as good as the best years over the past two decades. As for McLaren Vale, yields were 30% to 50% less than normal but with the quality of the grapes more than compensating.

At the end of June, ‘Wine Australia’ released their vintage report for 2012. Below is what they had to say for the key regions in South Australia. It would seem overall that yields are down but quality is excellent. Only time will tell how successful a year it has been, as it is ultimately the consumers, like you and me, who decide.

Cool conditions and below average yields (Shiraz down by 25% and Cabernet Sauvignon by as much as 40%) led to great varietal expression in whites and reds – with reds exuding brilliant colour. Overall, the quality of reds was exceptional. Harvest was up to a month early, with most whites picked by late February and early red varieties starting to come off in early February.

As in the Barossa, picking began up to a month early. Milder summer conditions and cool nights helped develop great flavours and good sugar to acid ratios, particularly in Riesling. Riesling, Shiraz and Cabernet Sauvignon were outstanding in 2012, with flavour development and acids progressing smoothly.

The 2012 vintage was one of the most condensed seen in McLaren Vale, with crushing completed by the end of March compared with the middle of April in 2011. Some wineries finished pressing out their wine before Easter. The yield was 15‐30% down across almost all sites. Wine quality is very promising, with the reds having excellent colour and flavour.

Yield was down 10%‐40% across various varieties but the quality is fantastic. All reports have extolled the outstanding colour and flavour development of the fruit across all varieties and the wonderful retained natural acidity in white grapes. Words such as superb, fantastic, sensational and exceptional have been bandied about.