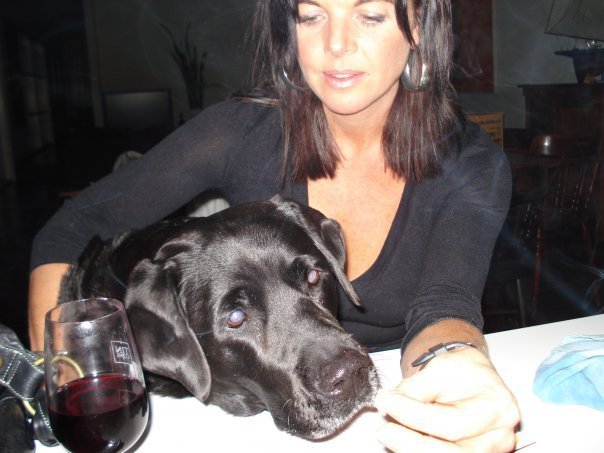 Thursday evening saw the return of Curious Wines to the Cork wine tasting scene. In possibly our most exclusive (and expensive!) line-up to date, Emma Shaw of Langmeil (pictured below at home with her beloved black lab) hosted “Langmeil Barossa and the oldest shiraz vines in the world”, during which a very fortunate audience tasted nine premium wines, including an Australian icon, The Freedom Shiraz.

Live Wire Riesling 2010 & Eden Valley Chardonnay 2010: Emma decided, being quite a sweet wine, that the Live Wire Riesling would be a good starter to whet the appetite. With many a little unsure of a wine labelled “medium sweet Riesling” (cue nightmares of Blue Nun), there were surprised heads all round. Despite being medium on the palate, it finishes on the drier side thanks to its vibrant, crisp acidity. As for the Chardonnay, I was delighted to note that we converted quite a few members of the ABC club (anything but Chardonnay).

Three Gardens SMG 2009 & Fifth Wave Grenache 2008: The SMG is our best-selling wine in the Langmeil range. Easy drinking and accessible, it’s got its foot back off the pedal just a little, and was adorned by those who like some restraint. The Fifth Wave was out first wine into ‘old vine’ territory. Opulent, rounded and incredibly smooth and juicy, it is produced from 55 year old vines. Terrific bang for your buck.

Blacksmith Cabernet Sauvignon 2007 & Jackaman’s Cabernet Sauvignon 2008: The Blacksmith was the oldest wine of the tasting, although it’s still youthful. I found it to be a great varietal example, herbaceous and cigar-box/tobacco like – arguably more of a food wine than the Jackaman’s. This, again, is where the old vine wines really stood out for their velvety concentration. Many picked this as their favourite wine of the night. More refined than the Blacksmith, although in fairness you would expect it be at double the price.

Valley Floor Shiraz 2008, Orphan Bank Shiraz 2008 & The Freedom Shiraz 2008: The final showdown was all about Shiraz. I think it would be fair to say the Valley Floor got a little lost against these two, not only because of the notch upwards in quality, but because it was nearing the end of the tasting and there was such anticipation for The Freedom. I have a glass of it here from a bottle that was left over last night and I can tell you it is absolutely singing! Check out this video on the ’07 from Tom Cannavan.

I was lucky enough to take home a quarter of a bottle of the Orphan Bank afterwards with half a packet of bread sticks. And, okay, I admit, it was even better than CHOCOLATE*! (*I am the chocolate monster). The bread sticks weren’t bad either.

And as for The Freedom, well, I was still tasting it half an hour after the tasting such was the length and depth in flavour. Certainly not a wine for the faint hearted, but again, the concentration really set it apart, and what I really loved was the balance of oak which brought a heavenly savoury edge. Some thought it needed another few years, I wouldn’t argue with that, but it still showed just why it’s become one of Australia’s icons.

Many thanks to Emma Shaw, and all our guinea pigs on the night, your support and enthusiasm was so much appreciated!