Home Blog Curious Facts & Fun Ah go on, ya will like Chardonnay 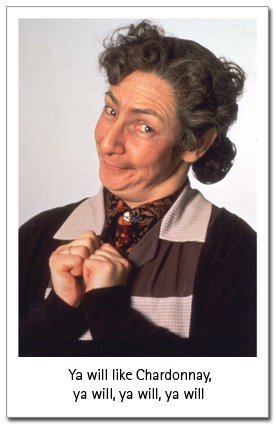 What is it about Chardonnay that divides people so?

Last weekend I had the Santa Alicia Gran Reserva Chardonnay open for tasting in the shop. It was the first time I’d tried it since we tasted sample of this first vintage at the end of last year. I was essentially killing two birds with one stone. I would get to try it again myself and take any leftovers home come six o’clock, and in addition I would get customers trying and giving their own feedback.

There was no better time as our Chardonnay sale had just got underway the day before. I was more excited than anyone else because I just wanted to show all those Sauvignon Blanc drinkers what they were missing. I’m never quite as confident with cheap Chardonnay, but this retails at €12.99 before discount and its from Santa Alicia, a winery I probably have more faith in than any other we source from. I was rightly confident after my first taste that this one was going to go down well.

And it did, very well, with customers that tried it. But I was reminded that the ABC (Anything But Chardonnay) Club is still a force to the reckoned with. With a couple of customers, as soon as the word passed my lips, before the wine was even in eye-shot, disbelieving looks would be cast: “You want me to drink ch… ch…ch… Chardonnay???”. You’d think I was presenting turps!

Is it just me or are some people programmed to hate Chardonnay? I suspect that this isn’t a question that is easy to answer. Everyone is different and has had varying experiences. Let’s keep in mind there was an awful lot of terrible Chardonnay on the market in the late nineties as the wine market in general took off.

There is certainly a contingent of ABCs who must have had horrific, life-changing experiences from drinking the stuff and would happily go to their graves never trying another. I also think there are those who simply enjoy familiarity and rarely step outside their comfort zone.

We had both sets of people in the shop last Saturday. It must be said, the greatest pleasure came from converting previously steadfast ABC members, as initial scepticism gave way to surprise and approving smiles. It was like opening a door to another world for a few customers. For the few that weren’t to be converted, they happily took away their regular Sauvignon Blanc or Pinot Grigio, and that’s satisfying in its own right because those people knew what they wanted and came back to us for it.

The task I have laid before me this month will involve getting more people to try good Chardonnay (of which, of course, we have plenty). If I can have a small part to play in the downfall of the ABC Club, I’ll be a happy man.

Some other good news on the Chardonnay front, The King’s Bastard Chardonnay (from winemaker Brent Marris, the man behind The Ned), has received the Consumer’s Choice Award at the “Chardonnay and Something Different” Tasting Results, which showcases the best Chardonnay-based offerings from New Zealand, a country which has really helped renew the image of this noble grape variety. More on that later.